No one runs around for the WWE like John Cena. Thanks to Scrapbookershaven.com for the image.

John Cena and Colt Cabana have both ripped off something near and dear to my heart. According to long time commenter B-Esser, Colt Cabana has marginally reworked the name to this column to suit his own purposes in a segment called “The Art of Pro Wrestling” (click on the link and go to the 8:45 mark) which did a fairly piss poor job of selling Ring of Honor merchandise. I’m not going to sit here and type that is was a brilliant plan to name my column what I did but I’ve been at it for nearly a year and since my misguided attempt to try and keep up with the gear that the WWE wrestlers wore (it changes damn near weekly) I have mainly focused on the merchandise. Colt, Eric and Jeremy interviewed you 2 years ago in Detroit right before you signed on with the WWE and you met Dusty and I at the same time.  You know who we are.  All I’m asking is for you to pimp Stunt Granny during one of your next segments since we helped give you a fabulous name.

On to John Cena who has taken a logo from the John Deere equipment that I used while running Ron’s Lawn Service in the fine city of Altoona, PA. He hasn’t gone throw back with this one (click here for the history of their logo) because he’s aping off their most recent logo but it does keep up his theme of nothing original in the design department. As soon as Cena walked on stage Monday and before ever seeing the logo, I saw the green and yellow colors and thought John Deere so the color combination has something going for it.

I’ll start off by looking at the new cap which uses the trucker hat model and is a perfect fit for the design.  His last cap was a solid one. They do have the common thread which is the U C(an’t C) M E logo which is the only original design the WWE has for John. The cap is simple and fits the motif so you can’t knock it.

Next up is the head and wrist sweat bands. I’d love to see Cena wear his own head band in the ring during matches. The head band is quite simple with a green band. Yellow text is used for the Cena portion of Cenation and the remainder is white. On the wrist bands, they again use the U C(an’t C) M E symbol and in the other side is the OK symbol that he throws up before going for the Attitude Adjustment formerly known as the FU. I, along with my cohorts, have no idea why the hell Cena does so if you know why, please leave a comment. The hand looks realistic but it makes it pretty cheesy looking. 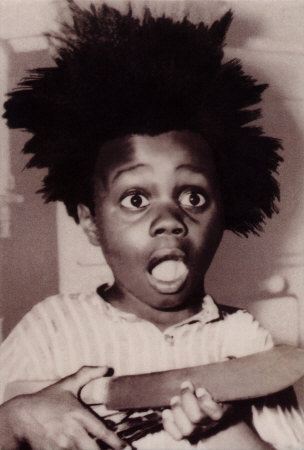 John Cena is "Otay" with Buckwheat I suppose.

That leaves me with the biggest piece of the new ensemble, the t-shirt. The background is black but I think it would have worked with the scheme better if it were white. There’s nothing bad about using black though. The back is an enlarged version of the U C(an’t C) M E logo with ever present Hustle, Loyalty, Respect underneath it. The left sleeve has the OK symbol with Hustle, Loyalty, Respect jambed in there which they do not have on the wrist band. That’s bad design to me because it should either be omitted or in both places. Hustle, Loyalty, Respect is also under the symbol which is just overkill.

As for the front of the shirt, it’s kind of snazzy but I’ve got a couple of minor problems with it. The first of which relates back to the OK symbol. The cartoon Cena and “dead weight”, since it doesn’t appear to be a particular opponent, look different. If the hand had gone more cartoony like the characters, it would have looked better. The WWE could have done a better job with the letter too. Cena appears to be squishing the letters at the bottom which is fine but they should have made the “dead weight’s” back flat with the bottom of lettering so you can see it all clearly. These problems are nits being picked so overall, I think the shirt and the other gear is pretty cool. Now let’s hope that someone doesn’t get arrested drunk driving on their John Deere wearing this stuff. – Kevin

7 Responses to “The Art of Wrestling – Deere Gawd”