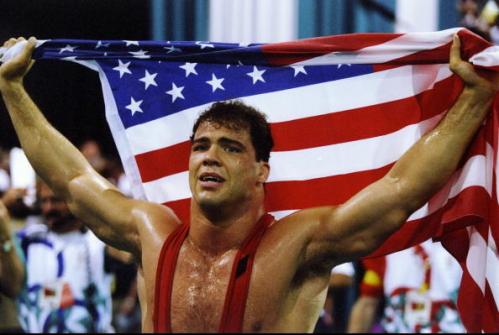 After this picture was taken, Angle was spotted selling the flag for a bottle of mystery pills and having some beastiality sex.

According to our friends at 411mania.com:

According to a criminal report filed in Pittsburgh today, Kurt Angle has been arrested and is currently in the Allegheny County Jail. There was an altercation at the home of Kurt Angle involving Angle and girlfriend Trenesha Biggers, aka TNA’s Rhaka Khan. Biggers went to police and filed a protection from abuse order against Angle, and police came and removed Angle from the home this morning.

At around 8AM, Biggers called police again, stating that Angle was stalking her. She had gone to a Starbucks to use the internet, and told police that Angle had her phone and had been circling the parking lot. She claimed Angle was deleting photos from the phone, which were described as “pictures of abuse”.

Angle was questioned by police, under suspicion of DUI, and when they searched the vehicle, they found used syringes and two vials of HGH. Angle claimed that he had a prescription for the medication, and could provide that to police.

Angle is currently awaiting arraignment on the following charges:

Angle is scheduled to defend the TNA Title tomorrow night at the Hard Justice PPV in Orlando, Florida.

WPXI News in Pittsburgh has also confirmed the story.

Two things about this:

1.) This is just another chapter in the sad turn of events that is Kurt Angle’s career. I’m willing to posit that Angle is the second best professional wrestler of the past decade, behind only Shawn Michaels (and no, Michaels wasn’t the best wrestler of the ’90s, but that’s a rant for another time). But lately, it’s been a bumpy ride for the former gold medal winner. I hope he can use this latest incident to be the wake up call he needs to straighten his life out. Somehow, I doubt he will.

2.) I can’t help but wonder what this means for the title match on Hard Justice. I’m going to hope that it means we’ll be seeing Matt Morgan become the new Heavyweight Champion and leader of the Main Event Mafia. With Jim Cornette having more booking power than ever behind the scenes, we have the chance to see TNA really turn the corner here with some cool stuff. It started with the riot a few weeks back, and I hope it continues with Morgan winning the belt. Time will tell. – Dusty