You are here: Home › Kevin's Blog › WWE News › The Architecture of Wrestling – The Joe 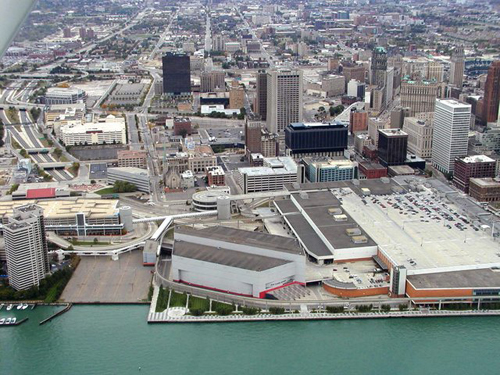 The exterior is so bland, I feel like you could play "Where's Waldo?" with Joe Louis Arena.

With a little extra time on my hands, I figured it was time to delve into the arenas that the WWE visits on a regular basis. For my first selection I’ve gone with the building that was the host of Monday Night Raw, Joe Louis Arena in Detroit, Michigan. I think it’s a bit unfair to start here because it was built in 1979 (if you want more history information go here) and an aesthetic arena design wasn’t exactly something that a majority of venues were worried about. It will serve as a nice base line though for newer arenas and to show how far arena design has come.

It is a hexagon with a large parallelogram that cuts through the longest portion of the building. The parallelogram is the highest portion of the building. Just below that are two bands that are flat with piers at the corner. In between the piers on the lowest two bands of the building the building seems to conform to the curved nature of the seating bowl. It just looks like it was tossed together rather than planning out some recesses and raised areas to create visual interest. The flat roof doesn’t create any visual interest either. 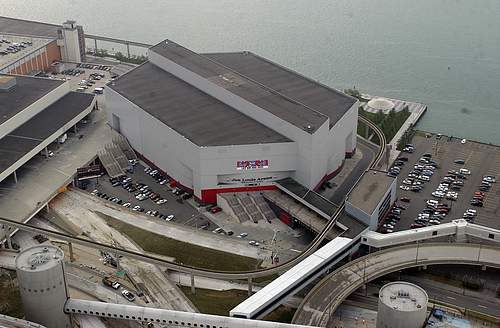 Even with the exterior as mashed together as it seems, it’d help if it had a different paint job. The red base only helps to make you notice that the top is a bland gray that blends in with the bland gray around it. Normally, I would worry about the arena matching or having common elements with the buildings around it but all I see in the near distance are gerbil tunnels and parking garages which aren’t exactly design oriented structures. Considering the awfulness of those structures, it’s all the more reason to do something more to make the arena stick out with a better paint job.

The structures around it also put on display that the site for the building is pretty atrocious unless you have x-ray vision to see through the walls of the arena to look out on the Detroit River. If the water front was developed, it would help to spruce up the surrounding area, give the arena something to borrow some of it’s extrerior design from and give a purpose to the Joe being sited on a river. 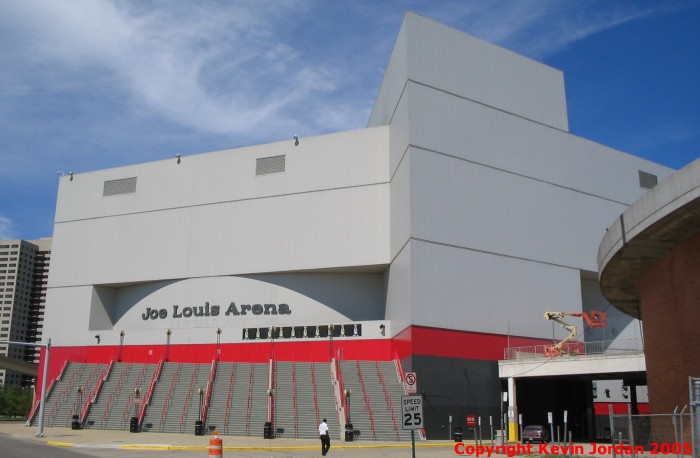 Nothing like having to take a nice long walk up a flight of stairs before even getting into the arena concourse.

I can’t really say too much about the interior but I assume it’s a pretty standard layout (especially from the seating chart) so I’ll hold off criticism of it. In total, there isn’t a whole lot to like about the extrerior of this building including the surrounding area. – Kevin