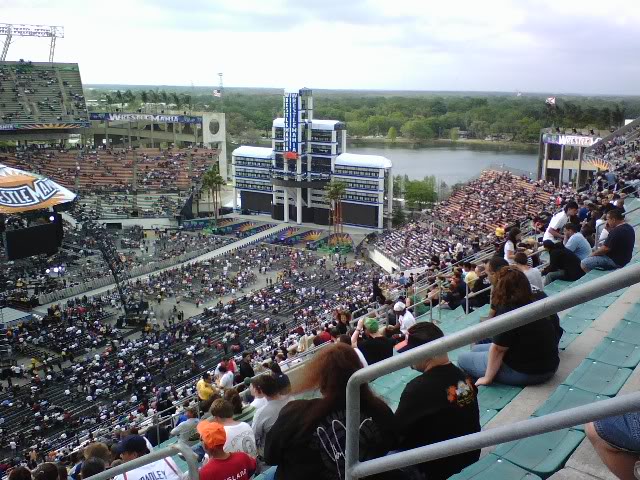 My picture of the set for Wrestlemania 24 in Orlando.

Most Wrestlemania set designs revolve around local or nearby architectural designs. The picture above from Orlando took cues from the Art Deco designs of Miami. If you have access to the PWTorch.com message board, you can follow this link for that break down and visuals on how this set mimics Art Deco. I am going to speculate on what style the WWE will borrow in the Atlanta area to design this year’s set.

According to the Atlanta Architectural Style Guide, there are five distinct styles from the area – Queen Anne (a derivative of the Victorian style), American Colonial, Neo-Classical, Craftsman and Neo-Mediterranean. As an addition, I’m going to look at some of the Modern designed buildings that have cropped up recently. So I’m heading for a six part column. Nail yourself down for architectural analysis.

I’m going to start with the Queen Anne style to stay in the order listed above. The Queen Anne style is mostly found around the Inman Park and Grant Park areas. The style guide (and Wikipedia) goes on to note the dominant features of the building style. See the picture below as I go through the points. 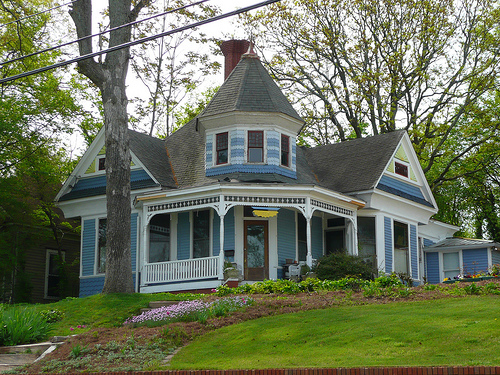 The Queen Anne style Victorian in the Grant Park area of Atlanta, GA.

The first features are an asymmetrical facade. The facade is the face of the building which is usually the side of the building facing the main street. The asymmetrical part comes from the round (sometimes square) tower often with an ornate spindle. To offset the tower, there is a dominant gabled roof mirrored around the tower. Even though a tree obscures the view of the left gable, under both of them one can see the oriel windows which have a flat face and 45 degree walls which help make the gables look like they are projecting. Below the tower is the main entrance which is covered by a porch. This porch stretches from oriel window to oriel window. Because the tower terminates at the porch, it minimizes it’s verticality even though the walls below match those of tower. Those elements are the main size elements to this style of building. Below I’ll go through some of the detail work.

The easiest to see is the varying textures on the exterior. On the oriel windows, there is wood siding that runs horizontally. Above the horizontal banding are yellow relief panels. They are relief panels because of the raised design on them. On the tower, they use shingles that are scalloped to look like fish scales. To fancy up the porch, they use columns that spread at the top to support a band of leaded glass work that has a gold diamond and trim at the top and bottom. In between the bottom of the columns is a fence that is normally called spindle work because of the design that is hard to see in this picture. 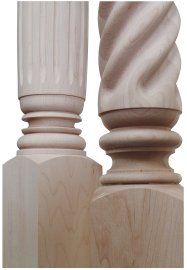 A close up of spindles in the Queen Anne style.

The one last element be addressed is the monumental chimney that is just off the left of the tower. The flair at the top of the chimeny helps to add extra, well, flair to an already tall chimney.

Analysis: I don’t think there is any way that the WWE would want to make a set based around this style of architecture. It has very interesting elements but it’s more work in the details than there is in the size much like the Art Deco designs at the top of article. The WWE tends to simply the design that they are copying and there isn’t a very good way to simply this style and make sure everyone knows what it is. Anything with an asymmetrical design is also another problem point. I have reviewed a lot of shirts for the WWE in the past and many of their shirts that were asymmetrical were terrible. It’s tough to balance something that is inherently unbalanced. It takes a delicate hand and that is again not a strong suit of the WWE. Big cartoony characters, big cartoony set designs. This style is out. Let’s move on to the next one: American Colonial. – Kevin

3 Responses to “The Architecture of Wrestling: Wrestlemania Set Design Part I”