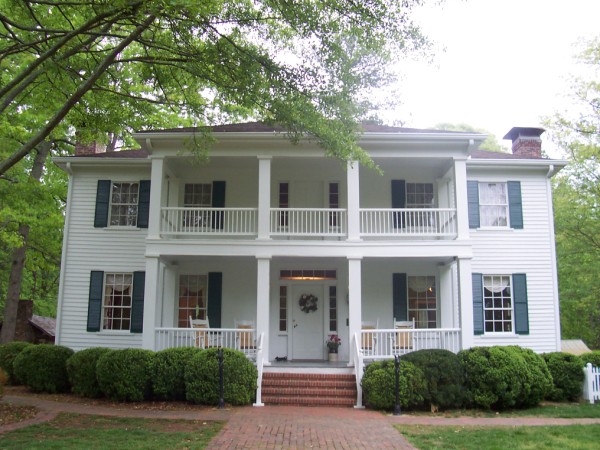 Neoclassical architecture came about in the 18th Century, as did the American or Georgian Colonial, in response to the exaggerated styles of Rococo and Baroque. This style imitated more closely Classical Greek architecture and the Italian architect Andrea Palladio. Robert Adams was the architect to bring this style to the United States. He called it “Federal architecture.” The main example in the Atlanta area of Neoclassical architecture is Stately Oaks Plantation which was the inspiration for Tara in the book “Gone With The Wind” by Margaret Mitchell.

The style is quite similar to that of the American Colonial as you can see the symmetrically spaced windows and the square floor plan. The porch that covers the main entrance and bedroom above does give the plan a slightly different shape. In the Colonial style, the pilasters held up entablature. Because of the structural needs of the porch, the pilasters have been converted to full sized columns.

The details are the samilar to Colonial architecture from the mutin bars in the windows, although they do have them in both lites, to transom and tansom light. The door in this instance does have side lights (windows beside the doors). Chimneys are on both sides of this building too. 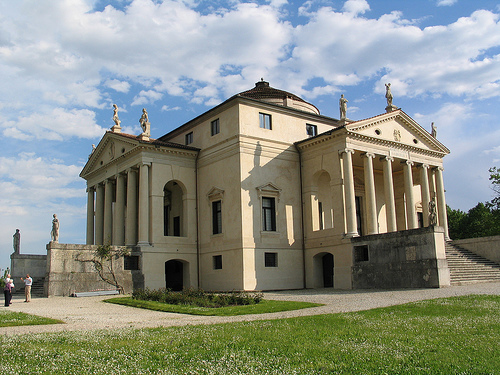 Villa La Rotunda by Palladio. This Villa is some next level work.

Analysis: Since this building is style is pretty much the same as the previous one, I’m going to use the same wrap up. This building is suited for use by the WWE because of it’s simplistic design and it’s symmetrical look. Unfortunately, there isn’t much for the WWE to cartoon up. They love to use oversized columns but I’m not sure they’re going to be willing to use an entablature or cornice around the set. I don’t think they’ll use this style, but I’ll give a final verdict after going through the other 3 design styles. – Kevin