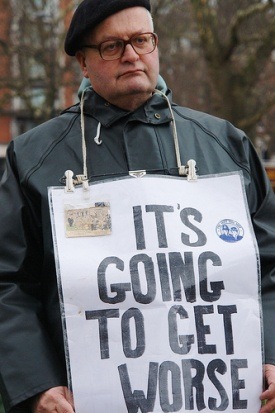 Oh my god this is getting worse. Besides taking their horribly mundane show, Monday Night Raw, and stretching it to an unnecessary length of three hours, Vince McMahon and company are now changing the format? Yes, WWE Monday Night Raw is going to be interactive according to WWE.com; whatever that means.

Sorry about that. According to the press release this entails the following:

Starting with the historic 1,000th episode of Raw on July 23, The WWE  Universe will have new ways to get involved in the show through WWE.com and social media by deciding matches, stipulations, Superstar development and more.

So everyone clear on just what Monday Night Raw will consist of going forward?  Does this mean the entire creative staff gets fired? If the WWE Universe is going to decide everything now then what are they there for now? Does “Superstar development” mean that the Universes input will make up their promos?  Will they be deciding feuds? What happens to Sin Cara and The Great Khali? (See cause no one gives a shit about them.)

Just for the sake of argument that the input from social media will factor in to actual booking decisions, here is a small taste of what gets posted on WWEs Facebook page during Raw. I withheld the names for their own sake and no editing was used at all. No really, why bother changing perfection?  -Jeremy

jhon laurinaitis ,was WRONG!!! for firing big show , JHON YOU ARE A SELF CENTER PIG!!!!! AND WWE WILL NOT LET SHOW GO HHH WILL SEE TO THAT ! YOU SUCK!!!!

I am really getting tired of the way that piece of crap laurenitis is running the shows hes was a loser when he wrestled and he is a loser now if things dont start to change I might not be watching anymore!!!

John Laurinaitis is wrong for doing that he is just taking advantage of big show and he is to over powered as GM. I think when John Cena gets done with him he would have made a big mistake.

My God, who evn make John or what ever maybe ds devils name d GM? If wwe did not do something about ds evil man now, he will bring ds company down. Infact, John L, you are fired.

Mr. Larenasshole gets on my nerve ok tired of watching him. He disgraced Big Show dune with wrestling for now. Need teddy bac not gonna have Mr Larenasshole disgracing westlers.