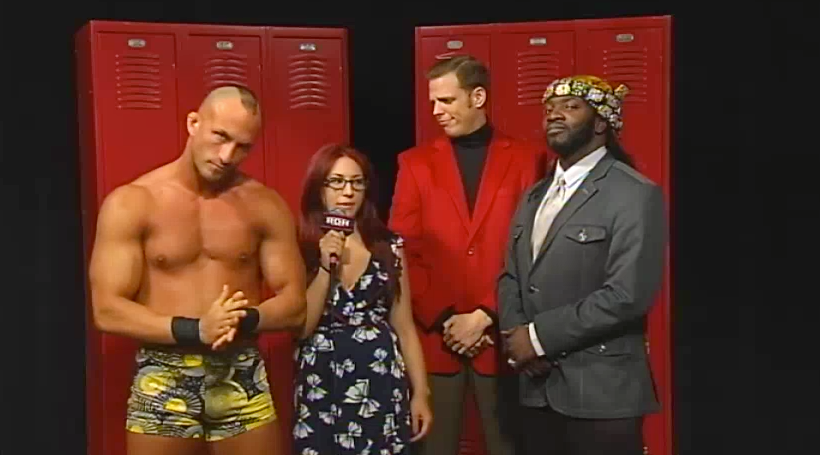 Two of these four people are relevant to the topic. Screenshot courtesy of ROHWrestling.com

The Top Prospects is still going on so I’m going to try and write about a positive idea that ROH have. Unfortunately, they tested my patience with the opening match to this week’s show. Adam Everett, who Kevin Kelly, Steve Corino and Prince Nana talked about glowingly, got stuck in a match with an angle. His opponent was “The Romantic Touch“, who the announcers knew next to nothing about him including Prince Nana who organized the tournament. Veda Scott came down to call out Rhett Titus who was under the mask. Corino and Nana being misogynistic to her made some sense in that it was inline with their characters except for one small problem, she’s a heel and so are they! When Kevin Kelly joined in on the misogyny line of questioning, it became down right weird. Kelly is the baby face announcer who shouldn’t want to see a damsel in distress. The whole situation was made stranger by Scott herself making a very valid and baby face in nature point that Rhett Titus is not a top prospect hence compromising the competition. The Romantic Touch then played to Veda Scott who called him Rhett Titus. Touch got in another move or two but then played to Scott again. Everett took advantage of the distraction and rolls up Touch for the win. The Romantic Touch would not have played to her if he weren’t Rhett Titus. The last I checked, Rhett Titus was a heel. So Veda Scott, a heel, was calling out a heel in The Romantic Touch while all the announcers played doggie pile on the woman. Fantastic booking guys. To make matters worse, this Everett kid looked like he had a solid aerial arsenal but because the match was based around the angle, Everett didn’t get to show off much. He has at least one more round but I feel ripped off in the quality wrestling department.

ROH also tested my patience in the second match. Cheeseburger, crowd favorite for reasons that still escape me, took on Hanson, who looked like a Highlander. Hanson dominated in a squash match which is good because that’s what should happen when he was twice Cheeseburger’s size. The problem to me is that same obvious fact. A squash match against someone closer to Hanson’s size seems impressive. Having him beat a man that the announcers called 144 is just expected. I don’t think it gives Hanson much of a preview similarly to Everett in the first match.

The match set up was very similar to that of last week. Kongo didn’t stand much of a chance in my estimation despite being much larger physically than Cheeseburger because a green fat man with a terrible look isn’t even going to cut it in ROH. There was also a match with an angle in Corey Hollis vs Mike Posey, his partner. Fortunately for the match, the angle took place before it started. We’ve had one quality match so far out of this tournament. Here was the point that I was going to say, there are X number of matches left so we’ll see how things go. But despite going to their website and Facebook page, I can’t find the Top Prospects Tournament bracket. I made fun of Kevin Kelly last year for wanting everyone to fill out their bracket for this tournament. Now I wish I had the opportunity to just look at a bracket. ROH made it worse than last year’s Worst. – Kevin