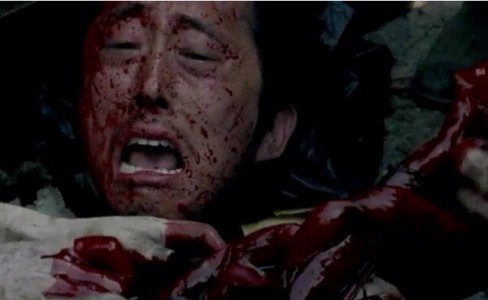 Saved from twdenthusiasts.com but surely from AMC in some capacity.

Kevin: So, it’s going to be a busy day. Are we going to get into The Walking Dead?

Jeremy: May as well get this out of the way; how the hell do they get Glenn out of this? He certainly should be dead but like anything else you can analyze the scene and he wasn’t bleeding form mouth. Whenever someone gets gutted they bleed from the mouth.

Kevin: Nicholas was laying on top of him so it could have been his guts but I don’t know how he gets out of it. Zombies are pretty dumb but they seem to know when people are still alive.

Jeremy: Popular theory I read was he crawled under the dumpster, which still wouldn’t work.  The covered in blood theory doesn’t apply because it has to be walker guts not people guts.

Kevin: He could have used some of the dead zombies laying around as his cover. Nicholas & him did kill quite a few before dummy offed himself. Has that happened before? It was a perfect ending for that character.

Jeremy: Nah they were clean as a whistle on top of the dumpster. The other part is the amount of walkers. How the hell do you get out of that without it being a total eye rolling scenario?

Kevin: It would be an eye rolling if Glenn gets out of it. They were in a dead end with zombies on the other side of the end. The hidden like Dutch in Predator is the only way to get out. Even then, it’s pretty far fetched.