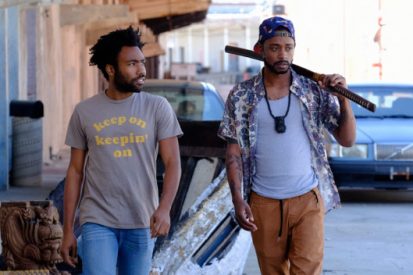 Was John Cena talking about one of these guys from Atlanta? Saved from vulture.com. Photo by Guy D’Alema/FX.

Chris & Kevin are back fresh off of watching Smackdown Live so naturally they talk about John Cena taking on “The Guy From Atlanta” aka AJ Styles. How bad of it was Cena to not at least mention Styles name on TV? How many viewers does the WWE get for the Network from these type of appearances? Does that kind of flub up make Cena fans less likely to root for him? Does it help fuel the criticism that Styles is leveling at Cena? Will the outcome help determine who ends up winning the Royal Rumble? Or does the Raw heavy nature of the Rumble hype with Goldberg, Brock Lesnar and the Undertaker mean that the winner will take on the Universal Champion? How wide open is the winner of the Rumble this year compared to other years recently? With so many big men in the Rumble, do the small guys stand a chance? Don’t you need fodder to throw out of the ring? Will the likes of Rusev, Big Cass and Baron Corbin end up being tossed even though they’ve been getting pushes recently? Why didn’t Enzo Amore announce that he’d be in the Rumble while Big Cass did so? Wouldn’t he be perfect to get tossed? Does anyone keeping their respective Championships at the Rumble mean they won’t change hands before Wrestlemania? Will a Roman Reigns win over Kevin Owens for the Universal Title mean one of Goldberg, Lesnar or Taker win the Rumble? How are all of the ladies fairing these days? Chris & Kevin cover Charlotte vs Bayley hype, Sasha Banks vs Nia Jax and why it’s good for the SD Live crew to have a six woman tag match at the Rumble. What else is there to cover from the world of WWE? Why did Kevin wait until the end of the show to bring up ROH? What’s the Bell Time Beer of the show this week? Find out the answers to all of these questions when you click on the link.