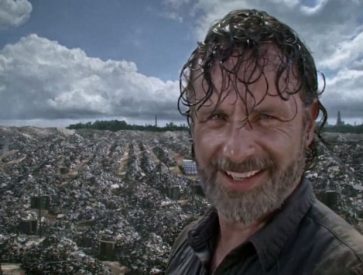 Kevin: So where do we start with this episode of The Walking Dead? With the Kingdom or with the new faction lording over a well organized trash heap?

Jeremy: Lets go with the Trashbag gang. So, did they just keep Winston down there for this such a predicament?

Kevin: I assume so because there really wasn’t a good way to get out and they even had at least one viewing tube for the fight.

Jeremy: I liked the scene since it was so bizarre for the show. All I kept thinking though was how infected Rick has to be with something now.

Kevin: Almost every group seems to have some type of pit to fight zombies so it wasn’t too surprising they’d have a set up like this. Why you would use that many swords for a zombie pin cushion is more questionable for me. And yes, Rick has to be nine ways of infected from the hand or leg wounds.

Jeremy: On the search for guns, they need to find a Neosporin factory. Good lord. I did like Gabriel was not in fact a coward and ran off. It was sure convenient the way it paid off but it worked. I thought the line Rick told him about enemies becoming friends was kind of harsh. I think that has more to it than just Gabriel though.

Kevin: I’m not sure Gabriel was ever truly an enemy so I agree it was harsh. Gabriel was just another guy looking to not use violence in a violent world. Gabriel’s character has seemed to have taken a turn for the better but it is funny that he’s barely been seen since the change in attitude.

Jeremy: See in the comics he is barely around. This is way more than he has been used in both.  They have differentiated form the comics big time these last two episodes and that is a good thing but it may get to be another situation of dragging things out. I do not understand the reluctance of Tara to tell Rick about Seaside (Oceanside?). She literally owes them nothing. They didn’t seem that reasonable but at least telling Rick about them would be better than stumbling across them accidentally.

Kevin: I read an article about the show before doing this conversation and I’ve got to admit, I have no idea Tara was being reluctant about telling Rick about Waterside. Tara doesn’t owe them squat. Plus, it’d really help to have another group and it just so happens they hate the Saviors too.

Jeremy: My thoughts as well but then they made it pretty clear they don’t want to be bothered. So sick the trash gang on them? I am guessing Rick gets Richards gins for them somehow. Richard is one of the better auxiliary characters now. Jerry is a cult favorite but Richard serves a purpose and has sort of taken Carols place. his willingness to sacrifice her was scary and smart.

Kevin: His faith in Carol’s ability to survive an attack from the Saviors was amazing considering that he doesn’t know her particularly well. Richard is certainly moving things along within the Kingdom who are still the only group to not want to jump into the fray of fighting the Saviors. The Trashlanders just need guns to get started.

Jeremy: Well, Hilltop has Gregory holding things up so don’t forget them. Richard seems like there is more to it than just being bagged on by the Saviors. I am still confused why the Saviors allow The Kingdom to carry any guns. Richard did say he set her up which surprised me. The lengths he is willing to go. I was happy they didnt drag out the reunion of Carol and Daryl.

Kevin: Gregory is only holding things up so much at Hilltop since as we noted last week, he isn’t popular and everyone came to Rick & Jesus about being ready to fight.

They haven’t done a good job of defining the relationship between the Kingdom & The Saviors. It’s pretty clear the Kingdom isn’t getting all of those goods at the abandoned warehouse they met.

And yes, it makes sense for Daryl to go straight to Carol after he knew her existence. Even if I still find their platonic relation really weird.

Jeremy: Why don’t the Saviors come to The Kingdom? Ezekiel mentioned  a battle with the lost limbs and parents so was he referring to The Saviors? Was it a stalemate? This wouldn’t make any sense considering The Kingdom is doing their bidding.

Daryl is basically a kid when he gets around Carol and that makes it creepier. Their reunion momenta are always the best though and feel real. Him caring so much about her that he lied was telegraphed but it made sense. Now just waiting for her to find out the truth.

Kevin: They still have plenty of time to define the Kingdom/Saviors relationship which I think would come out because it’s been one of the central questions so far in this season. Or at least Ezekiel’s reluctance to attack them so it must be a sweet heart deal.
Jeremy: Considering the Kingdom residents don’t know about the deal things could change quickly.I am guessing Ezekiel is going to somehow get to Carol and tell her about Glen and Abraham. Not that he knew them but mention their names.
Kevin: Daryl was trying to co-opt Morgan into helping get Ezekiel to change his mind, but your theory sounds much more reasonable.
Jeremy: Morgan can go away already. Keep walking stick walker, well walker, can;t even keep a stick but yeah feel free and talk with the Saviors. Moron. Maybe Morgan is a gauge for your humanity on this show? I would have no time for him. Daryl barely knows him so not much of a connection.
Kevin: It’s a show so I’m not worried about my humanity while I’m watching it. That could be their reasoning though. They have plenty of humanizing moments though, like as you point out Daryl & Carol meeting back up.
Jeremy: Her finally explaining why she went cold turkey on being a badass. About damn time too cause it didn’t make much sense. One thing, are the creators just trying to cement Daryl as the ultimate fan favorite at this point? he can subdue a tiger now?
Kevin: Trying? Daryl may as well be in carbonite as the ultimate fan favorite.
Jeremy: Well carbonite would be further cementing his status. One thing that has been a recurring issue for two episodes is Rosita’s attitude. Where did this come from?
Kevin: I have no idea. Seeing as though Rick is finally moving in the direction of attacking the Saviors, I thought she’d be pacified since she’s been ready to go at them since the Lucile incident. But that clearly isn’t enough now, she needs to be bitchy to everyone.
Jeremy: Also incredibly reckless. You would think she would have l;earned from them not planning last time and old Abraham and Glenn ended up dead.
Kevin: Nope, she’s still too frosty that another woman slept with her man so it’s immediate revenge or waiting longer than she has already after her first failed attempt to shot Negan.
Jeremy: Plus it ended up getting Eugene caught so maybe that has something to do with it. Would be the third man in her life that died.
Kevin: Like many things on the show, it would help if it was spelled out better. I don’t need to be hit over the head with the information but you have little reason for some of the actions of people.
Jeremy: I can understand the need for vengeance but with her it is so surprising. it doesn’t help Rosita has been a blank slate so far.
Kevin: Yep, here’s the totality of what TWD writers have told me about Rosita: She shoots well and she was Abraham’s fuck buddy.
Jeremy: When you are right, you are right.
Tweet