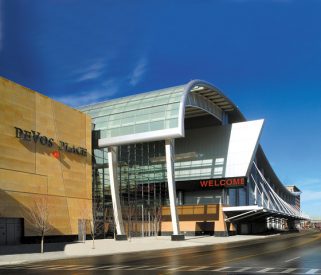 Kurt Angle is out to present Alexa Bliss with her new Raw Women’s Championship. She tries to spin “You deserve it” into hating on the fans. Wow. Just. Anyway, glad she could re-establish her smarmy self. Ronda Rousey comes out nine shades of angry. Angle holds her at bay while Bliss continues to talk about how great she is. Bliss ends by talking about how Rousey is an over hyped rookie. Considering that Rousey has been in 2 out of 2 matches that have been memorable and Bliss has been in 0 of I’m Not Sure, I agree with Rousey. It’s worth snapping over. She assaults Bliss then attacks with the brief case. She then turns her ire to Angle. The referees try to stop the rampage but can’t. Renee Young gets a word with Rousey who says Renee needs to wish Bliss good luck because she’s going to need it in thirty days when she comes back.

Seth Rollins comes out. He’s ready for a new challenger. Dolph Ziggler comes out followed by Drew McIntyre. Ziggler ends up taking the challenge. Ziggler takes control of the match after an early break. Rollins comes back with a Ripcord Knee (what I had been calling a Rainmaker Knee). Rollins goes for the Stomp but Ziggler rolls away. Fame Asser for a near fall. Ziggler stomps before a Superkick. Rollins gets to the Superkick first though. Ziggler rolls out of the way of a Frog Splash. Ziggler goes to the top himself. Ziggler fights him off twice. Rollins rolls through for a Buckle Bomb. McIntyre gets on the apron but never touches Rollins. It distracts him enough for Ziggler to roll up Rollins with a handful of tights to become new Intercontinental Champion. I’m so confused. I can only hope we can sort out this logic on the show tomorrow. We’re supposed to take Ziggler and McIntyre seriously because he won the IC Title out of the blue.

Bobby Roode makes quick work of Curt Hawkins. Put this on the list of things I didn’t expect to happen tonight. Not in the magnitude of the paragraphs above but it’s still there.

Monster In The Bank video package. Jojo invites Braun Strowman to the ring afterwards. He does his normal short promo. He vows to let Brock Lesnar “Get These Hands.” Kevin Owens comes out to start a feud with Strowman. He does so by complimenting him then saying that they’re similar. Owens then chums it up with Strowman. He wants them to watch each other’s back. Owens saying he had no interest “getting these hands” cracked me up. Owens asks to shake hands. They do so but Braun won’t let him go. Braun goes for a Power Slam but Owens slips out.

Bayley sits down beside Sasha Banks. Bayley tells her to stop replaying the MITB match in her mind. Bayley got embarrassed last week by the Riott Squad. She wants to team with Banks against the Squad. They’re starting with a clean slate.

The Deleters of Worlds, Matt Hardy & Bray Wyatt, are taking on Heath Slater & Rhyno. Curtis Axel & Bo Dallas pop on the screen in fake Hardy & Wyatt costumes. They do a good job of mimicking their usual catch phrases. Dallas may actually do a better Bray Wyatt than Bray Wyatt. I swear they gave Slater & Rhyno a tag team championship reign to give them credibility for every job they’ve done since then. Why does Wyatt’s side ways Spear not have a name yet? Kiss of Deletion for the win.

I think I should drink every time Kurt Angle looks confused. Constable Corbin gives him a phone with Stephanie McMahon on it already. He now has another major announcement on the evening.

Jinder Mahal is smiling too much for being a guy who just lost last night. Sunil Singh is with him. Mahal may not have won the match but he has found tranquility. What is this garbage? I’ll give this gimmick time but it’s not off to a good start. Chad Gable needs to forget about the past. Mahal gets in a few moves but Gable takes control quickly. Big Boot by Mahal. Khallas for the win. Honestly, being quiet like they’re being for Mahal works wonders too.

The Riott Squad should really go for it in their destructive skits. Breaking a lap top really pales to, oh, let’s say flipping an ambulance. Sarah Logan & Liv Morgan are Sasha Banks & Bayley’s opponents while Ruby Riott is on the outside. I’m confused on what narrative the announcers are trying to push. Part of it is Banks being sub-par after the MITB match, part of it is Bayley being a loser for not having any other friends to ask to be in the match? Banks gets the hot tag in the match. Morgan bucks Banks off a Back Stabber. Bayley tosses an o interfering Logan. Sarah tries to take her off but Bayley kicks her away but inexplicably goes after her so that Banks can’t tag out. Banks suffers the loss because of it. Morgan rolled her up with a couple of handfuls of tights. Banks ends up pushing down Bayley. Maybe this time they’ll actually feud. Bayley catches up to Banks back stage. Banks is finished with Bayley. Bayley attacks first. I’m still not sold that this will actually end up being a feud because of how many times they have stopped it before now.

Kurt Angle comes out to announce Brock Lesnar’s next opponent. Before he can say who it is, Roman Reigns comes out. Reigns is still the uncrowned champion. Bobby Lashley comes out. He can beat Brock. He can also beat Reigns. Angle makes a multi-man match for Extreme Rules that will involve both of them. The Revival come out to take on Lashley & Reigns. They talk up being a team. Reigns is ready for “Bob” to learn something from him. I was going to make the comment after the last match that the “Team” against two singles stars has faired better than normal recently in the WWE. I don’t think this match will keep with that trend. Why is Bobby Lashley taking a beat down, again? Reigns gets the hot tag. He cleans house. Just as he’s ready to Spear which ever jobber was legal, Lashley tags himself in. Spear for the win.

Finn Balor wants an opportunity at the Universal Championship. Constable Corbin mocks Balor for not deserving the chance. Kevin Owens pops into the segment. So does Braun Strowman. We’ve got a main event finally for the show. There’s only thirty minutes left in the show.

No Way Jose is taking on Mojo Rawley. Grand Rapids is wondering what they did to deserve this match. People should walk out on this instead of a Reigns match. Flap Jack for the win by Rawley.

Bayley is not done with Sasha Banks. Banks is smart, hops in the car and drives away. I’m still not convinced this will be a full fledged feud. Some may call me cynical for that opinion and I’m good with that.

Elias is in the ring. He calls out Rollins for cheating which again makes so little sense of what happened earlier in the night. I don’t care if Elias works in “It’s all good because he lost tonight” logic into his song lyrics. He also wants a shot at Brock Lesnar.

Renee Young is going to interview Seth Rollins. Young wonders about the match last night. As if that matters more times than not in the WWE. Young wonders if McIntyre had anything to do with the loss. Rollins owns the loss and says he needs to solve the McIntyre riddle by next week when he invokes his rematch.

Finn Balor & Braun Strowman are taking on Kevin Owens & Baron Corbin who is not wrestling in a dress shirt & vest? Balor gets tossed onto Owens & Corbin on the outside for the first memorable move of the match. Balor ends up taking a beat down after it. Strowman gets the hot tag by stopping the beat down and tossing Balor into their corner. From the apron, Corbin clothes lines a charging Strowman. Corbin dodges a charge and hits the post. Balor tags back in. Strowman takes out Owens by plowing him through the barricade. Balor counters a choke slam into a DDT. Corner drop kick. Corbin knocks him off the top rope. End of Days for the win. This episode has not been very good. – Kevin DiFrango