I looked on both the Pro Wrestling Torch and Prowresling.net but I didn’t see mention of any special appearances by Batista so it appears as if Stunt Granny has it’s first exclusive.  I’ll admit up front that I’m an Iron Chef America junkie.  I was a huge fan of the Original Iron Chef also.  The show originally aired last Sunday, September 7th, but it always repeats Saturday night the next week.  Alton Brown, the host, doesn’t introduce the judges until after the first commercial break.  Lo and behold, Batista is one of the judges.  During his introduction, they mentioned that he was a big fan of the show.  Batista was dressed in a black pinstripe jacket with a black t-shirt underneath.  He presented himself fairly well especially considering that the secret ingredient for the show was snails.  Brown asked him if he liked them and he admitted that he didn’t eat them very much.  That was his only camera time before the judging.  During the judging, Batista wasn’t as knowledgable as the other judges but he also didn’t make a fool out of himself.  Both the challenger, Floyd Cardoz and Iron Chef Bobby Flay made sure to present him with larger meals.  His favorite dish of the evening was prepared by Bobby Flay because it was something he could easily identify, a snail pizza.  If you’re up on the East Coast, it airs again at 2 AM. – Kevin 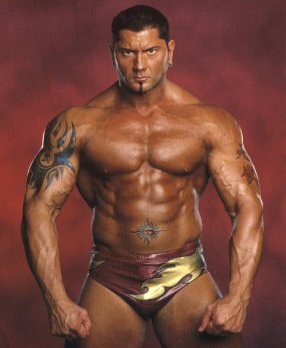 I said the snail pizza was excellent. Do you have a problem with that?

For any other culinary guest appearances, contact me at kevin@stuntgranny.com