You are here: Home › Jeremy's Blog › It Really Is The Age Of Orton 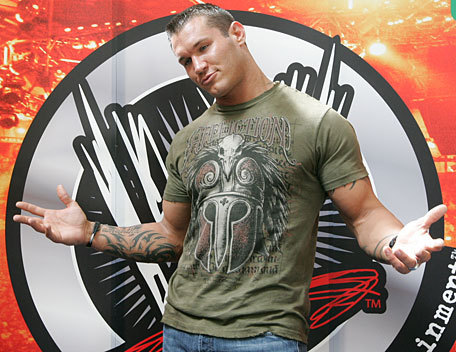 It's my time now.

If the last two weeks haven’t made things perfectly clear, Vince McMahon is panicking and bringing back his top heel months earlier than he should. Randy Orton supposedly, even though there is no documentation of his accident, reinjured his shoulder and was supposed to be away an additional three months of time. Instead he shows up on Monday Night Raw two weeks later in a sling. The following week he is back, slingless, and getting involved physically.

The timing of Randy’s return is no coincidence as John Cena is down until at least next year’s Royal Rumble. Vince McMahon needed a top act for Raw. Yes, he has Batista and Shawn Michaels, but after those two, the star power is dim.

JBL has been a mainstay, but his return to active wrestling has been met with a tepid response. Chris Jericho is just now hitting his stride and is currently doing the best work of his career. Rey Mysterio has been oft injured, so relying on him has become difficult. Vince does have CM Punk to continue building for a top position, but right now his success hinges on a strong heel.

This is where Randy Orton comes in.

Vince is giving Randy the chance to shape the future of the Raw brand. He is already being paired with three newcomers in Ted DiBiase, Cody Rhodes and Manu. He has been given the opportunity to give rub the same way that Triple H and Ric Flair did with Randy and Batista.

Along with being the supposed leader of a new faction, he will also be relied upon to elevate CM Punk and possibly Kofi Kingston down the road. The immediate task before him is elevating CM Punk to the top of the card either above him or just a notch below. He is going to be tasked with the idea that his heel heat will be enough rub for Punk to play off of.

It’s definitely a risky proposition for Randy. CM Punk had momentum after winning the title from Edge, and even though he was booked awkwardly since, he was gaining momentum based on fan response at live events and especially on television. WWE decided to take the title off Punk and give it to Jericho, thus leaving Punk entangled with Orton.

The argument can be made that JBL was actually the one to get Punk over, and in a way it can be taken that way. Unfortunately, it doesn’t appear that WWE realized that this is not the JBL of four years ago. He has slowed down and lost much of his edge in the ring. It translated to boring promos and a lackluster feud.

Like it or not, WWE is throwing all of its chips on the table and letting it ride on Randy Orton to bring a select few wrestlers up the ladder. This is being done despite the fact that just recently Randy has shown another side to his personality: He is actually speaking with some believability.

He also has maturity issues to deal with outside the ring. He still cannot live down his past behavior. Then again, all of his misdeeds are still rather recent.  He can talk about how he has changed now that he is married and has a child, but he will remain under close scrutiny even now.

He is being given the large responsibility to shape of WWE’s future and he hasn’t really done a thing to earn it. It has fallen to him by default.

Regardless of the reasons behind the decision, WWE has really gone out on a ledge here. By entrusting Randy Orton to get other wrestlers over, they have possibly doomed themselves or they are going to look like geniuses.

Beyond that, Randy Orton holds the future of a handful of young wrestlers’ careers in his hands. If he fails to get them over, it may doom them all. WWE has shown they will press the eject button on a wrestler very quickly when they feel they cannot be salvaged.

The next few months, until John Cena returns at least, are all about Randy Orton. It is all about the future, and it can be all about failure if he self-destructs.

Jeremy Maes can be reached at Jeremy@stuntgranny.com

2 Responses to “It Really Is The Age Of Orton”