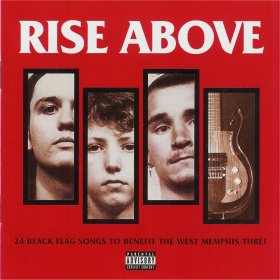 Edge might be a Black Flag fan. Thanks to ryanadamsarchive.com.

While trying to figure out what to review next, I eliminated TNA because the Phenomenal Brand shirt can’t be made out even in the enlarged picture, Black Machismo’s shirt sucks so much it doesn’t deserve more attention than this run on sentence and the MMG “Bel Air” looks like it is pretty cool but again, the enlarged picture doesn’t help clarify the images. So then I went to WWEshop.com and saw that Edge’s Rise Above t-shirt was number seven. Of course as soon as I was ready to put in the link, the top 10 changed. At least we know the WWEshop.com keeps up to date. Even though I went through the Edge’s Father’s Day package (Part I and II) a couple of weeks ago, I want to give this shirt a whirl.

Edge’s ink is so nice that the WWE used it on another piece of merchandise, this time a t-shirt. I wish they had a better picture of the tattoo itself but multiple pictures in his gallery aren’t any better than the first link above about it.

I’ll go over the back since it’s been covered some in the previous post. It’s a red faded star with the Rated R box in the middle of it in grey. I think they should have kept the red as bright as the heart on the front to help create more contrast but otherwise it’s a simple branding on the back of a shirt.

The meat of the shirt is the front. The off center design works quite well because of the contrast between the light grey arm (It’s a shade lighter than the boxed R on the back) and the remaining black. The arm has veins, triangular finger tips along with the beating heart. The ghoulish cartoonyness of the arm locks in the evil persona of Edge. The light grey arm does get additional ccontrast between it and the heart since it is all buffered by a black outline of various sizes. The tattoo is highlighted in the center of the arm with also a contrast buffer with the black outline, layered next by red and popped by using white inside the banner. The text is a red and black combination and is separated by stars of the same color. The stars connect to the star on his shoulder and his other merchandise so it helps to tie everything together.

One could say that the WWE found “The Cutting Edge” with this shirt. – Kevin

PS – In case you’re like me, you wonder who the Memphis Three which is on the bottom of the Black Flag album.  Go to this link and learn something. Black Flag kicked ass even if you disagree with their stance for this cause. – Kevin