You are here: Home › WWE News › WWE Needs Your Help! 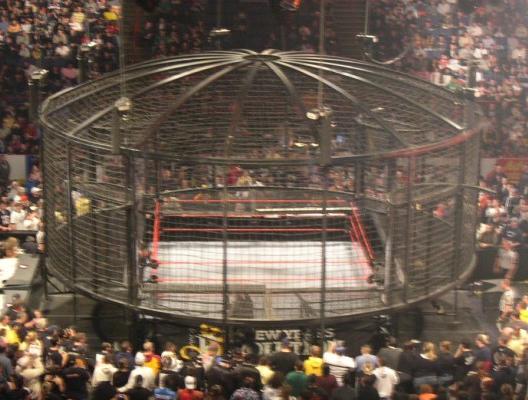 Well, it's better than a red bird cage.

I just checked my email a minute ago, and there was one from WWE. They need my help! Apparently, even though they have a full “creative” team on their payroll, they need to do fan surveys to figure stuff out. I’m starting to wonder if the creative team serves any purpose whatsoever other than figuring out ways to get themselves on television because they are all marks for themselves and are hurting the business and deserve to suffer great pain for the rest of their lives.

But I digress. The point is, I was sent a survey to help the helpless figure stuff out. The purpose was to determine what should be the name of the PPV that features Elimination Chamber matches in the main events of the show. The choices were as follows:

They had you rank the five choices in the order you like them. I voted for No Way Out since, as logic would dictate, that’s the name they’ve gone with in the past, it’s not a bad name by any means, and why change something that doesn’t really need to be changed? I also wouldn’t mind using the name “Elimination Chamber” much in the same way WCW called their show “War Games” when it featured a War Games match.

The other three names are ridiculous and if that’s what the creative team gets paid to come up with, where do I sign up? – Dusty

Just a reminder, you can discuss the Elimination Chamber, the Chamber of Conflict, the Halloween Havoc Chamber of Horrors, and whatever else you like to discuss by registering for our free message board: http://www.stuntgranny.net/cgi-bin/yabb24/YaBB.pl