You are here: Home › WWE News › Chris Nowinski Speaks Out Against WWE 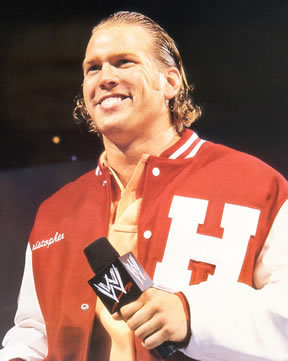 Went to Harvard, you see.

In professional wrestling, taking fewer bumps and fewer falls from high places would cut the number of concussions.

“The idea of going off the top of the cage into the ring may actually be as stupid as it looks,” Nowinski says. “You cannot slow down the trauma to your brain. Your brain absorbs a ton of trauma. Even if it’s not concust, it’s a high level of trauma that didn’t used to exist in the wrestling industry.”

“Everybody who got black lung going into the mines and died knew they were going into the mines,” he says, “but they didn’t know the full consequences.The only way to get real change is for the McMahons to get out of the business or for the federal government to come in and declare it an unsafe workplace.”

This is right along the lines of something I’ve been advocating for a long time. For as good as ECW might have been during its peak, it certainly hurt the business with its popularization of having guys taking a zillion chairshots to the head. Everything has to be more, more, more these days. One chairshot isn’t enough. One flip off the ropes isn’t enough. These guys have to try to kill themselves in order to get any reaction from the fans anymore.

If everyone just slows down and realizes that taking less bumps, less unprotected shots to the head, less of everything stupid that is all too commonplace these days, then stuff might be able to get over. Less really is more in wrestling. Work smart, not hard. Like Jim Cornette would say, it used to be that the wrestlers were pretending to beat each other up, but people believed it and it got over. Now, the wrestlers really *are* beating each other up, but since everyone knows everything is fake, no one believes it and it doesn’t get over. I hate wrestling right now. – Dusty