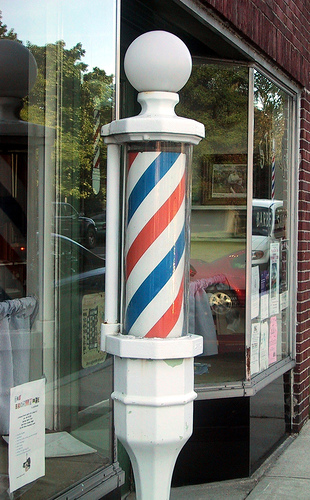 Take a guess who's in the main event?

Bobby Shields was accompanied to ringside by Sex Appeal, Bobby Beverly, Nicky Valentino and Dawn Decadence. Shields took on Ben Fruth, one of Mike Tolar’s lackies. Shields took down Fruth easily and then paint brushed him. Fruth returned the favor when Shields took him lightly. Joe Dombrowski said that Aaron Draven was supposed to wrestle Shields but the doctors sent him home because of his injured ribs. Fruth got a close call on a roll up. “The Body” hit a “Gorey Special” for the victory. Sex Appeal hit a triple super kick on Fruth after the match.

Analysis: Fruth look better in the ring than I expected. His size (tall and really skinny) along with ridiculous ring gear don’t help his look though. A pink tiger striped shirt shouldn’t be combined with red and black pants. Shields looked solid but needs to either stop the posing or hit the gym more.

Gregory Iron said that next week he’s ready to take on Bobby Beverly. He told Beverly that he should go get a tattoo of broken bones because that’s what he’ll have after the match next week.

Analysis: It could have been a little smoother (he seemed to slow on the second part of the promo) but it was fine.

Benjamin Boone, with N8 Mattson, took on Michael “The Bomber” Facade, who is a graffiti artist. Dombrowski said to expect high octane offense  him. They exchanged some basic moves. Facade hit a second rope drop kick.  He kept kicking Boone’s legs to cut him down to size. Boone rolled outside the ring. Facade came through the middle ropes with a drop kick.  Boone caught him on a cross body and rammed Facade into the ring post then the guard rail. Boone tossed Facade outside the ring, then distracted the ref so that Mattson could attack Facade.  Boone clamped on a bear hug.Facade took Boone down with an inverted DDT.  Facade hit some more kicks and a head stomp.Facade got a near fall off a spring board spinning heel kick. Matson interfered and knocked Facade off the top rope. Boone then applied the “Bear Claw” which is a double claw to the head. Facade passed out in the move.

Analysis: Fucking seriously? A “Bear Claw”? For fuck’s sakes. Plus, it’s not a good idea to have someone debuting and losing. Granted, Mattson interfered but I’m still not a fan of the idea unless Facade isn’t sticking around for long.

Hailey Hatred said she stepped up her game against Portia Perez in their second match and is ready for another match if that’s what Portia wants. Until that time, she’s open to all challengers, both men and women.

Analysis: Nothing special but I’m not a fan of the inter-gender matches. Hatred is pretty big though so she might not look too bad against some of the guys on the PWO roster.

They re-aired Joe Dombowski’s interview with Johnny Gargano from last week. We were then greeted by Mike Tolar and a grin-tastic Ben Fruth holding the microphone for him. Tolar said that Bob Golic had the nerve to put his hands on Tolar at Wrestlelution. He would have taken him out if Tolar weren’t so focused on Matt Cross. Tolar said he could have beaten Josh Prohibition and that means he can beat Gargano. Tolar said Fruth is the only one who can beat him because of the knowledge he imparted on him. Tolar said Gargano’s “Coming of Age” will be over because he will be the new PWO Heavyweight Champion.

Analysis: The goofiness with Fruth made sense and reinforced his dick head status but I think it hindered the promo itself. It got Tolar off track which is showing his determination to win the PWO Title.

Hobo Joe talked with Jason Bane and said that they could be best friends like Aaron Maguire and he were. Bane said he’s not a comedy act so they need to get ready for their match.

Analysis: This team could work well since Bane could always be in the Title picture. Bane can play the straight man while Joe does all of the funny stuff.

The Dream Team, Greg “The Hammer” Valentine & Brutus “The Barber” Beefcake, took on the Clash, Brian Bender & Earnie Ballz, for the PWO Tag Team Titles. Beefcake went solo since Valentine was still injured.  Aaron Maguire had left the announce booth for a reason that Dombrowski didn’t know. The Clash jumped Beefcake when he handed his ring jacket to Valentine. Bender started that match for the The Clash.  Ballz got tagged in and continued the assault.  The Clash tagged in and out frequently. Beefcake took over with some clothes lines. Everyone cheered when he hit a double noggin knocker. Ballz got back dropped to the outside. Ballz tried to use the crutch, but Beefcake caught him and used it against him. Bender got on the microphone and said that Beefcake used the crutch. Tom Dunne, senior official, came to the ring and disqualified The Dream Team because they used the crutch.

Analysis: The match was solid with only three participants. I’m not a fan of the referee making a change in the outcome but the Clash are the only real tag team PWO has now so it makes sense to me.