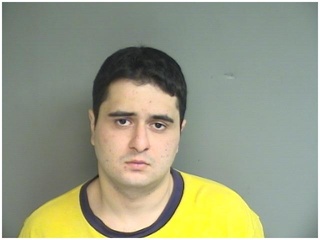 Yep, this is the real deal now. Such a dangerous looking lad.

Oh for god’s sake; this isn’t “It’s still real to me damnit” territory, but this waterhead’s reaction to some sad news is close. This is from the Conneticut Post; Zavr Peygumbari of Brooklyn, NY was arrested and arraigned yesterday for making threatening calls to WWE headquarters. You may be asking yourself why a twenty-two-year-old would do such a thing. Well, this retard was upset that the WWE released Mickie James. Yes, this dullard was mad his favorite WWE Diva would no longer be on his TV screens.

But wait it gets better!

“The charges against Peygumbari were filed a day before a car bomb almost exploded in Times Square in Manhattan.”

How this relates to the story is beyond me. One has absolutely nothing to do with the other and the time frames are totally unrelated. The fucking media sucks a fat herpes dick.

“In 2010, you can understand why an organization would hit the panic button,” Sherman said of the WWE decision to report the phone calls to police.

Um, I can totally understand why they would call the police; it’s called publicity, fucker. No one, no one believed this mongoloid was within ten light years of actually doing anything relating to WWE headquarters or its employees. The douche called from a cell phone and didn’t block caller ID.

I hate just about everything in this article.

So with that out of the way, here’s why this thing shouldn’t be arrested. If someone calls you and says they are going to blow up your building, blow em off. Anyone with such bad intentions does not warn and does not make twenty fucking calls to the front desk of your business. Imagine calling McDonald’s twenty times saying you are going to blow up the building because the chicken nuggets you have enjoyed all these years are not made of one hundred percent all white meat. The difference here is that the minimum wage manager would repeatedly hang up on you or eventually challenging you to come down and try it. See, that’s what should have happened here. This tardo had no chance of blowing up anything beyond a box of tissues on a Saturday night.

Here is probably the best wrote from the CTPost.com article.

“I’m sorry for wasting the time of the courts and taxpayers’ money,” Peygumbari said while handcuffed and wearing a yellow T-shirt.”

Eric astutely pointed out that “If you really wanna waste the taxpayers’ money, get on welfare and buy a decent outfit, ya bum”

One Response to “Retard Threatens to Blow Up WWE Headquarters- Updated!”