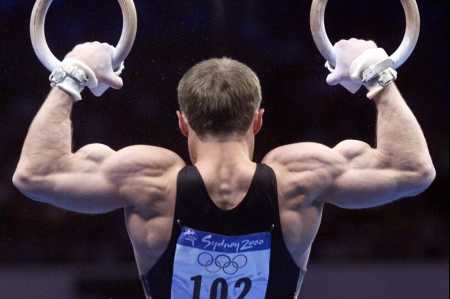 An Iron Cross is pretty impressive.

Because Pressure Rising got moved from January 15th to February 20th, Pro Wrestling Ohio decided to air “PWO Profiles” in the mean time to highlight some of the bigger names in the league. I was lazy in reviewing these because there wasn’t much new material being covered. I’m not going to review the matches since I’ve done that already. I am going to go through the shows to see how the performers did in a non-traditional wrestling setting.

“M-Dogg 20” Matt Cross joined Joe Dombrowski for the first installment. Dombrowski talked about the four way main event at Pressure Rising for the PWO Heavyweight Title between Johnny Gargano (Champ) vs. “The Megastar” Marion Fontaine vs. Jason Bane vs. Cross. Dombrowski & Cross explained his background in competitve gymnastics (An alternate for the U.S. Men’s team) and his unique offense. They then aired what appeared to be an older tape of Cross talking about himself. He said he liked to do Parkour in his free time then when running through a park pulling off hand stands, cart wheels and climbing a light pole. Cross seemed like he was geeked just to be on camera in this segment.  They went to shots of him pulling off moves on gymnastics equipment. Cross said “That was awesome” when they came back from the video. Dombrowski explained the sneak attack that Ashley Lane (Now Madison Rayne), Johnny Gargano and Josh Prohibition committed on Cross. Dombrowski asked how it felt to be on the shelf. Cross said that he was taken out because he was the best. Cross finished by saying it was frustrating. Cross told Dombrowski that Gargano’s face turn is all an act.

Dombrowski asked about his oppourtunity to become the first PWO Heavyweight Champion at the first Wrestlelution. Cross said it was a big deal because he was doing it infront of his home town crowd and because him & Prohibition had come up through the wrestling ranks together. They then went to a clip of the match. Cross was the first PWO Heavyweight Champion if you didn’t read my reviews back on Pro Wrestling Torch. Dombrowski said that Gargano was his first main challenger. Cross told Dombrowski that Gargano was a coward then, for attacking him after a match after claiming to be retired because of a back injury, and is still a coward today. They went to the clip illustrating Cross’ point.

After a commercial break, they showed Cross losing his title belt to Josh Prohibition after he had just wrestled a long match against Johnny Gargano. Cross said his only fault was not backing down to his arch enemy Prohibition. They went to the match clip.  Dombrowski explained the agreement between Cross and Gargano. Cross said that it is possible for Gargano to be a star like him some day. Cross mentioned that he had an agreement with Gargano to get a rematch since he never got one against Prohibition. Cross said he expected to wait no more than 2 months to get the match but he did have to wait longer.

Cross said that he has wrestled in 16 countries but wrestling in his hometown gives him extra pride in winning there. Cross used all of his opponent’s monikers (Megastar, Most Dominant Man) to describe his attributes. Cross said that he’s been everywhere to wrestle. He said Gargano shouldn’t have to whine about his hectic schedule as champion.  Dombrowski threw it to clips of Cross attacking Gargano in a parking lot. After a short gab session, they went through everything that Cross did to hurt people last year to put heat on Gargano in the locker room. Cross was allowed to have final words. Cross noted that he has beaten all three of the other competitors in the match up at Pressure Rising. He reiterated that Gargano was only better than him for a second at Wrestlelution 3. He said he will win at Pressure Rising and become champion again.

Analysis: Cross came across better than he has in most of his promos but he still is missing a little extra something to kick him up a level. I thought he and the production crew did a good job of highlighting why he has such a negative attitude towards Johnny Gargano. His wrestling is top notch.