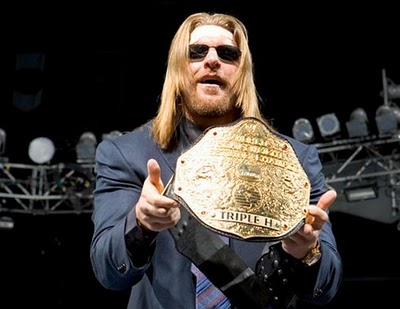 According to Prowrestling.net (see the video at that link), Triple H was recently interviewed by Kevin Eck of the Baltimore Sun at the red carpet event for something something whatever. Eck asked H (see, in journalism, you use last names after the first reference) whether or not he intends to return to the ring full-time. H responded by saying:

“No, as of right now, I’m not planning to return full-time to the ring. To quote Vince, I think I’ll be “in case of emergency, break glass.’ I’m at a good point for me. It’s a young man’s business. I’m at a point where I’m still healthy. I can still do this when I want.”

“When he wants” appears to be hardly ever, and to little benefit to anyone but himself. If you recall, Hunter’s last match was against Undertaker, an old man who needs no rub, at WrestleMania 28, a show on which ‘Taker wouldn’t lose if he’d just had all of his limbs cut off in a horrible lawn tractor accident. The match was labeled an “instant classic” by people without eyes, ears or emotions. His prior two matches before that were 11 and 12 months prior, both against relative newcomer Sheamus, who is awesome and could have used the wins to kick his career’s Irish ass even further into the stratosphere. Hunter won their WM27 match and only lost their Extreme Rules match because he was brutally attacked at the start of the show. Rub-a-dub-dub. So, I guess here’s hoping Hunter continues helping this young man’s business only by bringing us new stars like Sin Cara and Kharma and not by failing to stifle his ego and squashing 50 percent of the roster while wearing a DX shirt. -Eric