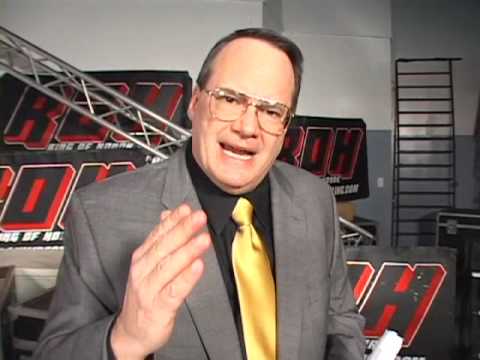 Stunt Granny friend and partner in crime Steve Williams checks in with this burning missive:

Here is my way-too-long, nearly 1700 word account of Ring of Honor’s  national television taping, which was held in Louisville’s historic Davis Arena on 10/1/11.  There are no match times, because only fags bring notebooks and stopwatches to wrestling shows.  Enjoy.

So without any further ado, here is his firsthand account of ROH’s television taping last night:

The taping appeared to be a legitimate sellout.  We arrived at 6:45 and could only find scattered single seats.  We had to convince a group of fat guys to scoot over so we could get two seats next to each other.  They (ROH workers, not the fat people) eventually had to add  several rows of chairs to the floor area to accommodate the crowd.  One of the quirks of Davis Arena is that there are two oversized, black leather recliners in the crowd.  A local pizza company used to sell pizza at OVW shows and would draw a name from the crowd to sit in the “Wick’s Pizza Party Zone”, where they would kick back in the recliners and get free food and drink during the show.  When ROH comes here, they charge (I believe) $150 per ticket for the recliner treatment.  Yes, someone actually paid for a recliner that is several rows back at a wrestling show.  Tickets were priced at $50 (first row), $40 (second/third row, depending on which side of the building you were on, and $15 (GA).  My $15 general admission seat was 8 feet away from the $50 seats, plus it was on 12 inch platform, so I could see right over the ringsiders.

Cornette came out for the rah-rah speech, and it was time for our first match!  OVW Tag Team Champions The Elite (Adam Revolver & Ted McNaylor) beat Moose Thomas & Rocco Bellagio, accompanied by “Prince” Bolin (Kenny Bolin’s son Chris).  The Elite are one of the best-working teams on the indy scene, and they have been together since 2006.  I believe The Elite won after their Spear/Russian leg sweep combo in about 10 minutes.  Good opener.

Kevin Kelly and Nigel McGuinness were introduced to the crowd and were seated at ringside for commentary.  Kelly received polite applause, but the place went nuts for Nigel.

T.J. Perkins defeated Mike Mondo, but I have no recollection of how he did it.  Mondo is ok, but he really comes across as a lower-card act.  Perkins was technically good, but showed little personality.

Cornette interviewed The Briscoe Brothers.  They are supposed to be heels, but a Kentucky crowd is not going to boo an asskicking tag team that wears Confederate colors.  Briscoes demanded a match at Final Battle against ROH Tag Team Champions Charlie Haas & Shelton Benjamin.  Cornette booked Briscoes vs All-Night Express “next week” to determine the top contenders.

It was around this time that something odd started happening.  There was a girl standing near the barricade wearing a silk gown watching the show.  She took the gown off and approached the ring wearing a bikini.  No one acknowledged that this was happening.  One cameraman approached her and filmed her up and down for several minutes.  It wouldn’t be so odd if this happened once as a buffer to air between segments on the show.  This happened several times throughout the night.  At one point, she was being filmed for what seemed like ten solid minutes, including several minutes focused solely on her breasts.  It didn’t help matters that the camera guy looked just like the tow-truck driver from Adventures in Babysitting.

It was time for the “television main event”.  Jay Lethal defended the TV title against Mike Bennett (with “Brutal” Bob Evans).  This was a good little match.  Bennett reminds me a lot of 2006-era Chris Masters, at least as far as his body appearance.  At one point, Lethal attempted the “Macho Man” elbow, but Bennett moved.  With 30 seconds left in the 15 minute time limit, Bennett mounted Lethal and started pounding on him, not unlike Ralphie beating Scut Farkus in A Christmas Story.  Lethal reversed the position with about 10 seconds left and stayed on top until the time limit expired.  Lethal and the crowd wanted five more minutes, but Bennett chose to retreat.

Roderick Strong defeated Kyle O’Reilly.  These two had a good, stiff match.  The story was that Strong is a stiff bastard, and the rookie O’Reilly was able to hang with him.  Apparently, O’Reilly trains with “Team Davey”.  Michael Elgin came out to attack O’Reilly after the match, and then someone else came out and got his ass kicked too.  Davey Richards and Eddie Edwards came out to clean house, going so far as to punt the Book of Truth into the front row, right into a fat guy’s face!  Cornette came out to help restore order.  I should point out that ROH had encouraged fans to bring signs to the television taping.  The only signs were two pro-Kevin Steen signs in the front row, and a guy behind them that had a sign which read “Let This Be A Sign”.  The three would all hold up their signs whenever they were on camera.  Cornette cut a promo on them, saying that he recognizes that Steen is a great wrestler, but the fans don’t have to deal with him as a person.  He called Steen mentally unstable and said he was an insurance liability, and reiterated that he had no plans of ever bringing Kevin Steen back to ROH.

Mark and Jay Briscoe beat ANX to earn a title shot at Final Battle.  This was a great match with some fun double-teams.  I believe the finish was: one of the ANX held Mark in a powerbomb position near the corner.  Jay came off the top and nudged Mark, who turned the move into a hurricanrana and got the pin.  If that wasn’t the finish, it should have been, because it was the most memorable spot in the match.  The Briscoes didn’t do much to establish that they were supposed to be the bad guys.

Next up was intermission.  They didn’t seem to be doing nearly as much merch business tonight.  The gimmick table was much smaller than usual, too.

Michael Hayes (no, not the Freebird) beat Mohammad Ali Vaez.  Both of these guys are OVW regulars.  Hayes is legitimately in his rookie year.  He also only has one leg.  He lost his left leg in an I.E.D. explosion in Iraq in 2006.  He was the only survivor  of the attack.  Unlike Zach Gowen, Hayes wrestles while wearing the full prosthetic.  He is quite mobile considering his predicament.  Vaez has apparently been attacking Hayes at OVW shows and ripping off the prosthesis.  He did it again tonight, only for Hayes to catch him in a submission hold.  Before he could tap, Vaez’s partner interfered for the DQ.  The match was ok, but a bit clumsy.  Considering Hayes’s inexperience, immobility, and the fact that Vaez had to work his right side, things went fairly well.

Michael Elgin dominated Shiloh Jones.  Good for what it was.

Jim Cornette came out to announce the top contender for the ROH World Title at Final Battle.  That man is…….Grizzly Redwood!  Just kidding, it’s Eddie Edwards.  Eddie came out and said that people always chanted “next world champ” at the American Wolves, and everyone assumed the chant was for Richards, but Edwards won the title before Davey did.  Eddie said that he learned a lot from Team Richards, but it was time for him to move on.  Eddie has a new trainer, but he wouldn’t reveal who it is.  The two shook hands and agreed to let the wolfiest man win.

Charlie Haas & Shelton Benjamin beat Cedric Alexander & Caprice Coleman in the week 2 main event.  This started out decent, but completely fell apart toward the end.  One of the guys not named Haas or Benjamin missed a series of aeriel moves that he was supposed to hit, including a standing shooting star press where he landed on his face Brock Lesnar-style.  This match is going to need to be cleaned up quite a bit before it airs.

The Young Bucks beat the Bravado Brothers.  Full disclosure:  I hate the Young Bucks with a passion.  That being said, they were much more subdued than they were last time I watched them live.  At the beginning, they offered their hands to Lance and Harlem Bravado, only to turn and shake each other’s hands instead.  This was a fairly competitive match and both teams looked good.  The finish came when the Young Fucks did some double team flippy 9 move sequence nonsense that ended with a 450 splash.  They refused to shake the other team’s hands after the match.  I hope they catch herpes.  My personal hatred for Nick & Matt Jackson aside, they got very little reaction until the finish.

MAIN EVENT TIME!  The American Wolves beat Roderick Strong & Michael Elgin.  Good, solid, hard-hitting match that seemed to go past 20:00.  My favorite comment of the night came from my friend, who is a casual fan and knows nothing about ROH.  As Richards was repeatedly kicking Elgin in the chest, my friend said “he’s just spamming the A button!”  He summarized the state of indy wrestling with that statement, in my opinion.  The finish was kind of screwy, although it could just be that I was tired and missed something.  Elgin had Richards in a hold (camel clutch), but the ref was distracted by Truth Martini.  Edwards locked Elgin in a dragon sleeper, choking him out.  Richards ended up on top of Elgin for the pin.  Davey kept looking at what appeared to me to be a wristband or something, then looking at Eddie like he didn’t know what to make of him.  Again, I had to have missed something here, because I have no idea what his deal was.

Overall this was a very entertaining night of wrestling, but far too long.  The show started at 7:00 and we were walking out at 11:05.  There were far too many superkicks and at least 4 “Codebreakers” throughout the show.  The crowd was hot for most of the show.   The venue was darkened quite a bit.  My guess is that they don’t want a building that small to be exposed on national television (Davis Arena sits 400).  Return date is 11/5.