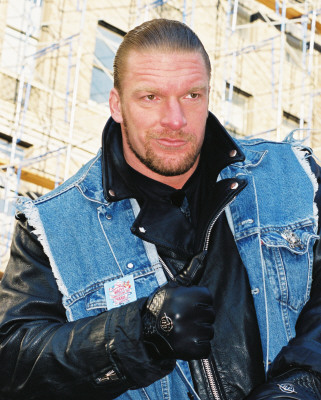 (For the 12 days leading up to Christmas, Stunt Granny will relive with you the 12 most head-slapping, dipshitty stories of 2011, the things that made us wonder why we still watch professional wrestling and support some of these dingbats. One of these guys whose pockets we’re lining – and believe me, with all of the coats he wears, he’s got a lot of pockets – is Triple H, who was revealed this year as the head of WWE’s New Talent Development. In that year, his pet project Sin Cara has gotten over with no one – plus suffered injury and wellness-policy suspension – and other talent such as… umm… hmmm, let me think here… Kevin Nash returned? Anyway, he’s doing a great job! [Ratings fall, Nero fiddles…])

(Originally posted April 7, 2011) This had been mentioned cursorily in other places a couple of months ago, but according to WWE’s official press release today about rebranding the word “Wrestling” right out of their name, Triple H is now in charge of WWE’s new talent development.

In addition to focusing on the expansion of the company, the company will bolster its core business with the launch a new talent development department headed by Paul “Triple H®” Levesque. The new department will put a greater emphasis on worldwide recruitment, training and character development to identify future WWE Superstars and Divas. The first recruit acquired under Levesque’s new department was the signing last month of future WWE Superstar, Sin Cara™, formerly known worldwide as Mistico.

On one hand, Triple H loves the business and wants to see it prosper, especially on his watch, which is where it will be as soon as Vince McMahon croaks. And with McMahon tied up with other (sure to fail) business ventures, with Jim Ross not scouting talent like he used to in the 1990s, and with John Laurinitis royally screwing up for the last seven years as head of talent relations, someone else needed to wrap their arms around this position.

On the other hand, Triple H is an egomaniacal scene-chewer, a bully, a prick, basically unfunny, probably not likable to anyone who wasn’t already kissing his ass, hasn’t done a whole lot to give back to the business that puts food in his growing family’s mouth (seriously, who is better off for having wrestled and feuded with Hunter?), and only taps out in wrestling matches because “if I can do it, you’d better damn well do it, too.” Oh, and he has a history of thinking many world-class wrestlers “can’t work,” either. That’s not the type of player-coach I’d want on *my* team, I’ll tell ya that much!

So Hunter’s first pet project was Sin Cara. Doomed from the start, or needing to leap some really high hurdles? Time will tell. At least there’s a feud with Hunter’s buddy Sheamus on the horizon, right? -Eric