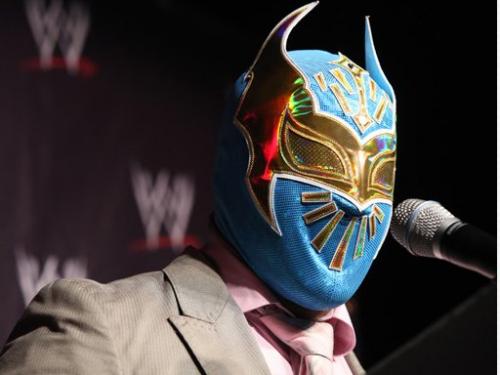 (Let’s just cut to the chase today: When looking for only 12 stories to summarize the stupidity of an entire calendar year in pro wrestling, a) it simply becomes damn near impossible to do, and b) you start to see trends in the idiocy. So, I’m sorry, but Day 7 of the 12 Days of Jesus H. Christmas brings you three tales of retardation, each involving someone we’ve already doted upon during this series: IWA-Mid South, the little engine that shouldn’t; Ric Flair, the million-time world champion without two dimes to hold between his often-naked ass cheeks; and Sin Cara, brought in by new talent developer Triple H and then suspended faster than a botched huracanrana.)

Hilariously, they’ve ethered all of the old board, apparently looking for a “fresh start.” Even more hilariously, the new ownership team is not revealing themselves. I’m placing my money on Ian Grotten and Fim Jannin, personally. – Dusty

Most notable to you might be that the Big Gold Belt is on sale for $4,550. Most notable to me is that for $750 you can have a live video chat with the man. The Man. I would be willing to put in upwards of five dollars, if someone else wanted to pitch in as well. We could have him talk about how great Stunt Granny is for five minutes. – Dusty

(Sin Cara Suspended: Originally posted July 18, 2011) Well this explains the loss on Smackdown, then the twitching awkward exit during the Money in The Bank match. See, Sin Cara has been suspended for his first WWE Wellness Policy violation.  They don’t release what exactly he failed but the fact he failed the policy is embarrassing. Maybe this turns out to be a Rey Mysterio type of deflection and he’ll produce a prescription but it still tarnishes Sin Cara and he doesn’t have enough polish right now to recover. All the hype, mood lighting and push he has gotten haven’t amounted to anything substantial. Smackdown ratings are in the grave and is soundly panned for being boring. Hopefully this will allow Sin Cara the time to get used to WWE’s rings and a few lessons in handling pressure. -Jeremy