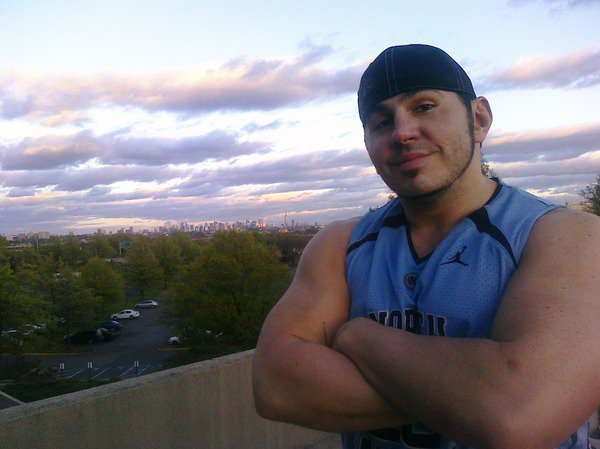 "And now I'll go drive one of those cars back there into a tree!"

(Once again, on a day like today, with so many stories to choose from, why pick one? Especially when they’re all related, and it lends multiple opportunities to poke fun at Mr. 2011 Matt Hardy.)

(Originally posted Sept. 14, 2011) According to Prowrestling.net, Matt Hardy was yet again arrested and charged with driving while intoxicated. Oh, gee willikers, I sure do hope this is the wake-up call Hardy needs to get his life back in order oh wait who gives a flying fuck about his life. If he doesn’t care enough to keep himself in working order, neither do I. If you’ve ever thought to yourself, “Man, these guys are hard on Hardy for what he does in his personal life,” keep in mind how much of his personal life he’s posted on the Internet. If you’re thinking to yourself, “Hey, this latest charge isn’t even something he Tweeted or YouTubed about,” remember that a violation of the law is in the public record, and if he wasn’t such a god-awful fuck-up as an alleged human being, his name wouldn’t be in the books to begin with. Sure, we all make mistakes. Well, once or twice is a mistake. At the rate Matt Hardy is going, he ought to just say hello to David Carradine for us. -Eric

UPDATE: Oh, that explains it, he was framed. (This, according to Prowrestling.net.) Yep, I’ve heard of this. I watch a lot of “Today” in the morning. What happened was, see, Matt was sitting at home, minding his business and messing with the many distracting settings on his Flip camera when, out of the blue, Jealous Internet Reporter Jones came into his house, slipped a roofie into his extra-large Oreo Blizzard, waited for Matt to go for a joyride in his “I’ve made two lifetimes’ income” Chevy Caprice Classic and then alerted the cops that an intoxicated Hardy was behind the wheel. Matt passed every sobriety test, and the cop, obviously a costumed writer for some Web site called Crashy Grandparent, placed handcuffs on Matt and escorted him to a real jail cell. Matt did absolutely nothing wrong to obtain his latest charge of driving (something you have to actively do) while intoxicated (something most people with a history of intoxication also actively choose to do). I’m sure we haven’t heard the last of this frame job, so stay tuned to Twitter, as if you weren’t already glued there.

(Originally posted Sept. 7, 2011) According to Prowrestling.net, Kurt Angle was arrested Sunday morning in Warren County, Va., and charged with driving under the influence. (Christ, you could set your watch to Angle’s drunken antics.) Angle went on to say that he’d plead not guilty to the charges because he claims his blood alcohol content was 0.06. However, the police (and who trusts them, anyway?) had this to say, according to the Northern Virginia Daily:

The wrestler’s first test, conducted at the scene of the traffic stop near Linden, came back above the legal limit of 0.08. On a second test at the Front Royal police headquarters Sunday morning, Angle blew a 0.06, according to state police.

[youtube=http://www.youtube.com/watch?v=GYCkrzLR4B8&feature=player_embedded]
(Originally posted Sept. 20, 2011) Saw this video posted last night. Unlike every time before with one of Matt Hardy’s videos I decided to sleep on it and watch it again. Apparently Matt is going to rehab on WWE’s dime. He is entering voluntarily thanks to the assistance of Vince McMahon – you know, the devil.

Regardless of previous posts correctly calling Matt out on his bullshit, this one is actually conflicting. It’s easy to make fun of the guy for falling apart on camera talking about finding himself and his happier days. It’s easy to point out his fashion sense is that of a thirteen-year-old MMA wanna-be.

What isn’t easy, though, is believing a word he is saying. You want to believe, at least I do, that he is going to get better and that he realizes he has to get better. But who posts a video blog telling people you are voluntarily going to rehab? What kind of glory hound has to put his personal business out there instead of just going and doing what he needs to do to get healthy?

Can you see the reason for being skeptical? It just seems like yet another line of bullshit to get hits on his YouTube channel and sell some “The Hardy Show” DVDs. Can anyone honestly say that this isn’t a possibility? Is anyone else waiting for a “very special episode” of “The Hardy Show” or even a “Celebrity Rehab” version of the show?

Now, after viewing the video, I think this may be another step after hitting rock bottom. Maybe Matt feels the need to document it as a reminder of how far he has fallen. We all remember the “Mattitude” gimmick back in WWE when it seemed like he was poised for great things. It never happened for one reason or another and he has been a joke ever since. If he goes to rehab and does successfully overcome his addictions, then great, welcome back to real life. The problem will be in dealing with his addiction. You don’t go in and suddenly come out of it no longer an addict. It is a daily struggle.

It isn’t an episode of your show. It isn’t a video blog. It is life and death. Look at the history of the industry and argue against it. This is sappy crap but whatever: I am rooting for this to be legit. I will take no shame in saying I was wrong and I’ll be at the front of the line to apologize for doubting his intentions.

So good luck, Matt Hardy, you are going to need it. -Jeremy

UPDATE: He better run his fat ass to rehab as fast as his bow legs can carry him, then, because according to Prowrestling.net, Matt Hardy was arrested yet christ-punching again, this time on charges of possession with intent to sell/deliver a controlled substance and possession of paraphernalia. Police searched Hardy’s home in Cameron, N.C., and found steroids, Ecstasy, a Red Baron pizza cooking in the oven, and Kurt Angle’s telephone number. So long, sucker! -Eric