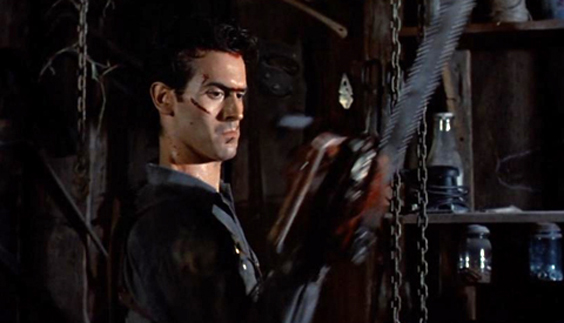 I wonder if the Dead Wrestling Society will ever have to worry about Ash.

Joe Dombrowski and Aaron Maguire introduce the show. The Dead Wrestling Society (Jason Gorey, Kirst & Krimson) take on Gregory Iron, Michael “The Bomber” Facade and Jason Bane. Marion Fontaine is seeking answers since his leg was under the rope when he got pinned by Matt Cross last week. The show opens with Bobby Beverly taking on Johnny Gargano. Gargano is introduced second and hits the ring running. Beverly catches Gargano with a kick before he can hit a suicide dive. Beverly tried to kick Gargano from the apron but whiffed. Gargano pulled his legs out from under him and nailed a running senton from the apron. Gargano tossed Beverly into the guard rail then back into the ring. Maguire does a great job of mocking the rematch between Isiah Bonds and Daniel Arkham later this hour. Gargano caught Beverly with a boot in the corner. Beverly used the ref as a shield and yanked Gargano off the middle rope. Beverly got a two count after an enziguri. A suplex by Beverly leads to a reverse chin lock. Beverly tossed Gargano into the corner chest first. Beverly thrusted again after a belly to back suplex. Beverly clotheslined Gargano. He caught him with another one after a roll up. Gargano double legged Beverly after more celebrating. Beverly slammed Gargano into the guard rail then tossed Gargano back into the ring. Gargano super kicked Beverly coming off the top rope. Beverly kicked Gargano in the gut. Gargano power bombed Beverly after he tried for a head scissors take over. Beverly tried to leave the match but Gargano dragged him back to the ring. Beverly DDTed Gargano as he tried to get back into the ring. Gargano gave Beverly an enziguri. Beverly pumo kicked Gargano. They traded super kicks. Beverly pinned Gargano for two after a urinogi back breaker. Gargano drop kicked Beverly. The ref got elbowed by Beverly. Gargano nailed Uniquely You but the ref was still down. The ski masked attacker nail Gargano with a 2×4. Beverly super kicked Gargano. The ref recovered. Beverly pinned Gargano for the victory. Bobby Shields took off the mask and said he wasn’t the masked man. Shields said that it wasn’t anyone in Sex Appeal. He said that when he gets here, Gargano’s life in PWO will be forever changed.

Analysis: A really good back and forth match. Some of the exchanges seemed to happen a bit too quickly for my taste but it was all well executed. It’s a good victory to get Beverly. He looked dominant most of the match so it didn’t feel as fluky even with Shields interference. Shields mic was not the best. Dombrowski covered for it though and the big parts of it came through clear. Score: +1.

Marion Fontaine had a camera with him when he went to confront Justin LaBar who was talking to Vic Travagliante. LaBar said he made a mistake but Fontaine was out. LaBar said he could have counted well over three. Fontaine said that it was fixed from day one just like he’d been saying. Fontaine said that LaBar is hurting the PWO product. LaBar acted like a beaten dog. LaBar asked what Fontaine wanted. Fontaine said he needed the camera out of there. Analysis: I say it when it happens in ROH, TNA or WWE so PWO isn’t exempt. I hate employee who somehow have management’s balls. You’re a fucking employee. You have jack for leverage. The most he should be able to do is get another match. They played their parts well enough. Score: 0.

Krimson quotes John Keats about beauty being truth. He said that Matt Moore is one of the beautiful people. Krimson said his life was beautiful once but it turned into a nightmare. He warned Moore about trying to step into his realm. Krimson said that he is acting with compassion once to warn Moore because he loves nothing more than smashing something beautiful. Analysis: That gets listed in best promos of the year so far. He showed vulnerability by being compassionate with his warning but still is ready to fight. Score: +2.

Mr RBI Isiah Bonds takes on Daniel Arkham in a rematch. Bonds attacks him from behind. Bonds whips Arkham into the corner. MR. RBI nailed a side slam. Bonds held Arkham in the back breaker position. Bonds clubbed Arkham with a double fist swing. He missed his next swing and Arkham popped him. Arkham drop kicked Bonds. Arkham chopped him off the middle ropes. Arkham clotheslined Mr. RBI twice. Bonds Black Hole Slammed Arkham on his third attempt for the victory. Analysis: Better than their last match but there wasn’t much to it. Score: 0.

“Omega” Aaron Draven said that he beat Ben Boone for the second time in a row. Draven said he’s been on a roll. He wants to take on all challengers. Draven said he wants gold. Analysis: It was OK but he should have started off by saying he wants to climb the ladder for a title fight and not challenged stars from the past. Score: 0.

Vic Travagliante does a review of the Johnny Gargano and the ski mask attacker. They replayed the whole end of the match from a year ago up until when Gargano was being carted out. It seems like they could have cut some of it out. You could have given Draven a bit more to talk about.

Benjamin Boone & N8 Mattson are backstage. Mattson said he isn’t going to go away because he’s retired in the ring. Mattson said what goes around, comes around because Flip Kendrick is now injured. Boone said that if Louis Lynden sticks around he has a Big Bear to contend with. Boone said that Draven got lucky. It’s time for fresh blood. Analysis: I liked Mattson’s part better. Boone did a serviceable job. Score: +1.

As the Dead Wrestling Society came out Dombrowski said that Kendrick’s career may be in jeopardy because of the beat down he received from them. They went to commercial. Gregory Iron came out first and waited for his partners. Michael “The Bomber” Facade was second with Jason Bane going last. They started brawling outside of the ring. Why not attack when it was just one of them? Facade suplexed Krimson on the outside. Bane rammed Kirst into the post back first. Iron spring board heloed onto Krimson & Kirst. Facade walked the ropes and nailed the crowd with a 450. Bane then barrel rolled over the top rope and nailed everyone else in the match. They finally rang the bell. Bane double clotheslined Kirst & Gorey. Facade got tagged in. Facade gave Gorey a spring board knee.  Kirst & Iron came in. Kirst got the ref distracted with the babyfaces while the heels tagged Iron. Matt Mason came to ring side. Krimson stared at him some but he still attacked Iron. Gorey came in and arm barred Iron. Bane charged at Gorey but he ducked out of the way. Kirst tagged in. Iron caught Kirst with a Code Breaker. Facade got teh hot tag. He got nailed by Gorey from behind when he took off his gui. Facade missed a spring board then caught with a moonsault clothesline. Bane tagged in. He gave Kirst a big boot. Bane tossed Gorey high in the air with a back body drop. Bane launched Iron into Gorey. Bane powerbombed Kirst. Krimson tried to attack Bane from behind. They both missed some offense. Bane gave Krimson a spine buster. Bane nailed Kirst with the Bane Line after Krimson ducked it.

Analysis: The match was good for what it was. It didn’t have enough time to work out as well as six man matches can. Gorey & Facade were both sloppy to me. The other four did good work. The good guys get a measure of revenge. Krimson can probably blame Mason. The group may be in disarray since the leader is distracted. The faces shouldn’t feel vindicated yet. So the story lines work well coming out of this match. Score: +1.

Final Score: 5/7. Final Analysis: Krimson stole the episode both with his promo and antics in the main event. The stories surrounding him are plentiful. The Gargano/Sex Appeal/Ski Mask Man story is progressing well too. I do feel a bit bad for Aaron Draven who gets the big spot at Wrestlelution but seems to be lost in the shuffle now. I’m not sure who he can feud with because every other heel that he would have competition against is tied up. It definitely had a bearing on his somewhat directionless promo. -Kevin