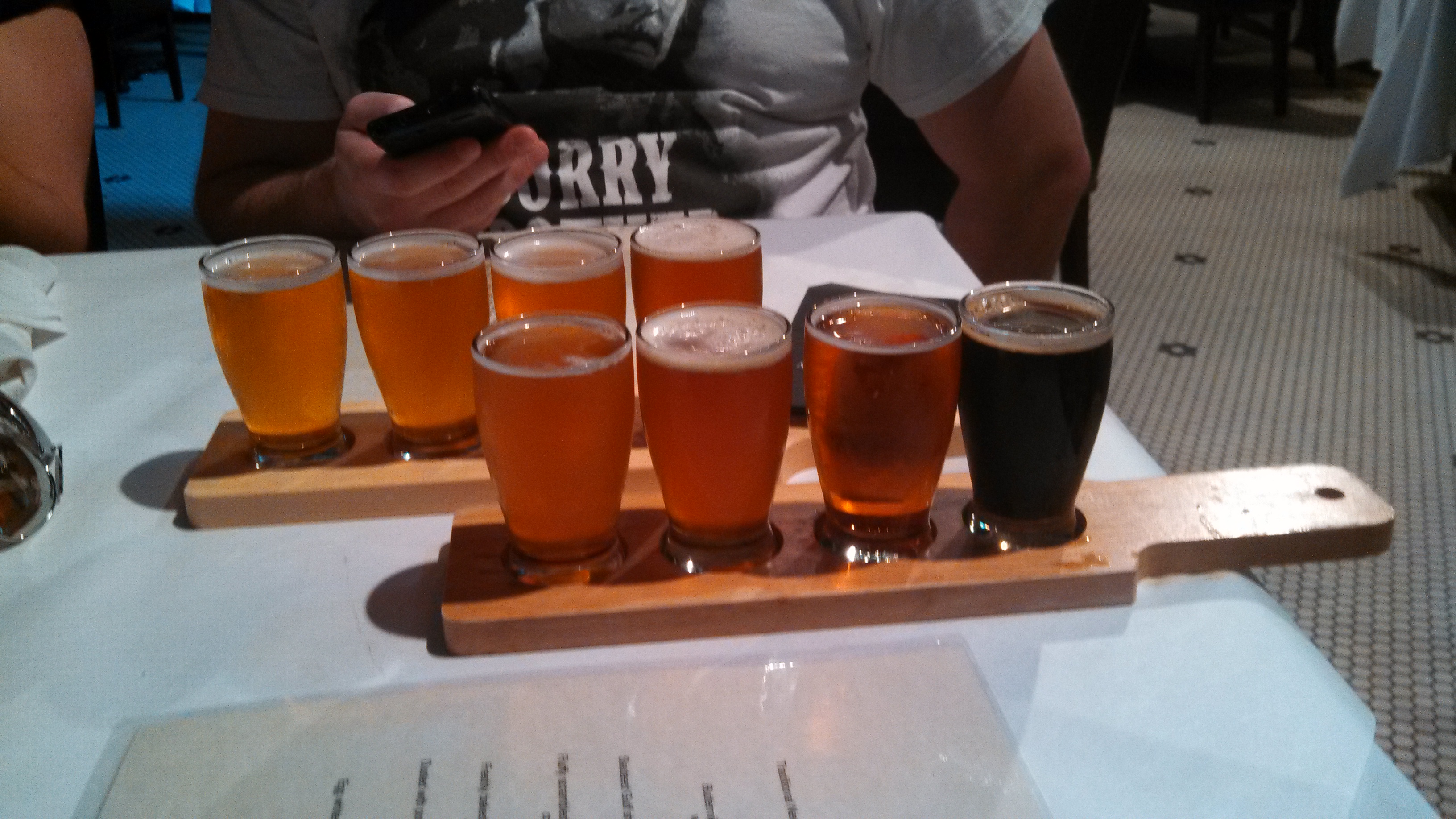 I believe this will be the final Wrestlemania related post. I hoped to do this at my parent’s house this past weekend but to no avail. I did get to pick up some beers though that I hadn’t gotten a chance to try before when I visited thee Altoona PA so more research material is a positive.

Jackson Brewery Bistro Bar – After wondering around much of Saturday morning just taking in the sights in the French Quarter, we finally worked up an appetite for lunch and stopped in at Jackson for food and beer. To make life easy, Jeremy and myself ordered flights of beer. Since they had a light colored flight and a dark colored flight, we ordered one of each. They didn’t follow North High Brewing theory that IBUs should order how you taste the beers. The two flights had two beers, their IPA and Double IPA, in common though so we didn’t order that much differently. I just got an amber & a stout while Jeremy and his lady got two other beers that no one can remember. The three of us tried all of the beers. I discovered that Jeremy isn’t much of a DIPA drinker even though he prefers the hops much more than I do. I thought the DIPA had an interesting taste though it wasn’t close to the Seven Fists of Deth from Revolution & Seventh Son. The IPA wasn’t too hop heavy. The amber wasn’t too malty. The stout wasn’t too heavy on coffee. I think that’s part of their beer problem. All of their beers didn’t have anything that defined their taste. The beers weren’t terrible but they weren’t anything to rave over. Most beers that are good play up one or a couple of ingredients then down play others. These beers seemed to be made with a thought of balance but they did that too well so their beers came out middle of the road. 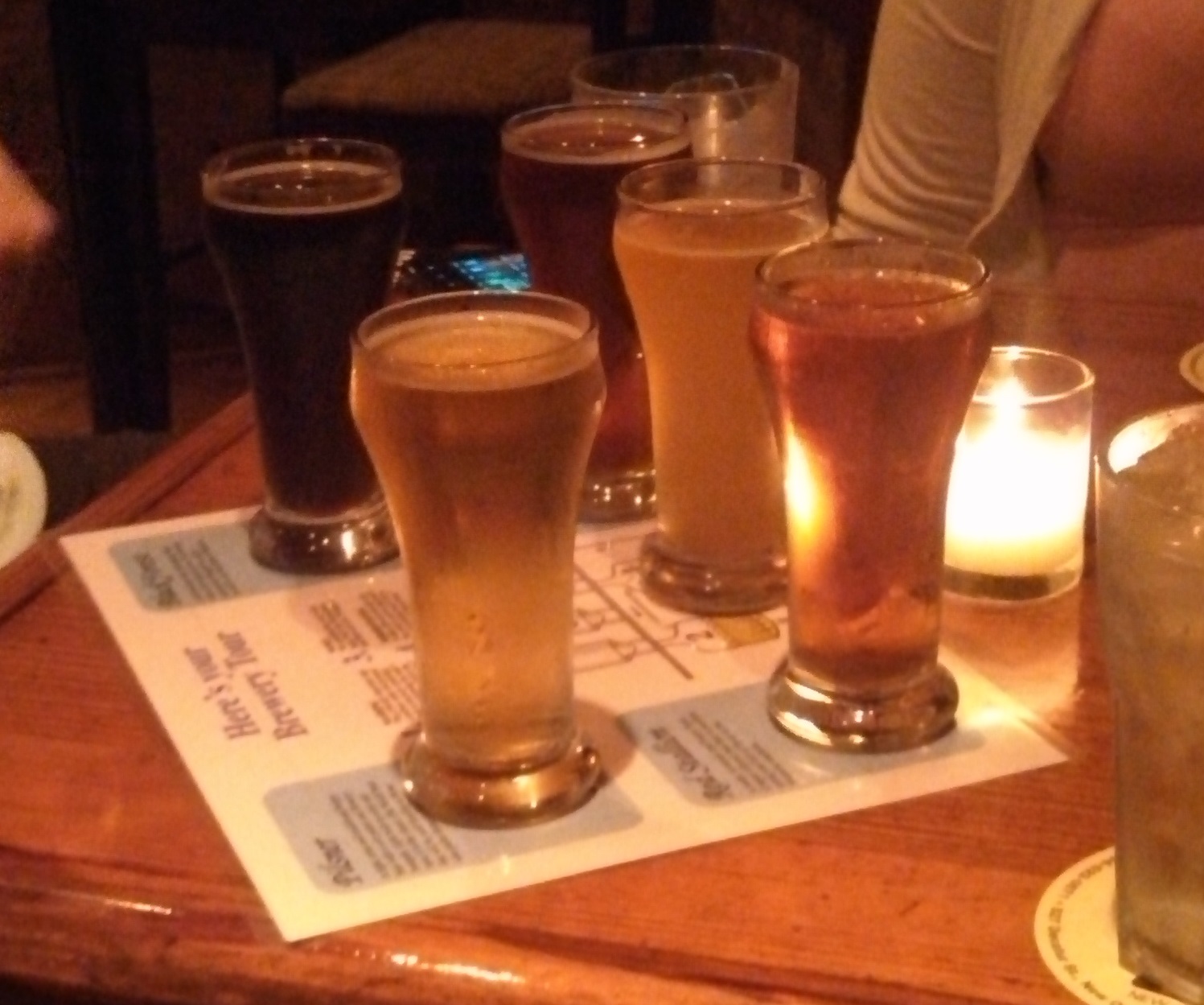 Crescent City Brewhouse – Later that night, before meeting up with Shahid, Cameron Hawkins & their respective ladies, we stopped in at the Crescent City Brewhouse. We yet again ordered a flight of beers to figure out which beers were the best. Because of the larger sample size, we only ordered one flight here. They had five types to choose from: Pilsner (Btm L), Black Forest (Top L), Red Stallion (Btm. R), Weiss (Middle R) and an Alt (Top R). I tried their Pilsner first as I knew it wouldn’t really grab my interest. It was good for a pilsner but as usual there’s no real bite behind it. The Black Forest is a traditional Munich style Black Lager. It’s a malt heavy beer with small notes of hop in it. This one was good. The Red Stallion is their Vienna style lager which has a sister beer in Eliot Ness from Great Lakes Brewing. This beer isn’t quite as malty which I don’t prefer but others may like this one better. The Weiss beer is their version of a hefeweizen. It was the beer I ended up ordering a pint of after our flight because I didn’t get to sample enough of it. After having a full beer, I’d say this beer was in the middle with the Black Forest and next beer taking the taste department. The Alt was their seasonal beer and was quite tasty. I had only ever had one other one and it’s the Myopic Red from Zauber Brewing. Crescent City wasn’t quite as good but it was Crescent City’s second best beer.

Tin Roof Brewing Co.  – Perfect Tin Amber – Because the lady & I spent most of Friday traveling (and due to the fact that Jeremy & his woman had their flight delayed), we decided to pack it in early after eating at Emeril’s, which I highly suggest even if it’s on the expensive side. I decided I’d have some beer for the hotel room. While looking around one of the local corner stores, I found this beer from Tin Roof which is from Baton Rouge. It was interesting because it melded two similar beers, an Amber with a Red. It came out more hoppy than I expected from two malt beers. It was a solid beer with a 4.5% ABV and 28 IBU. I just wish I had remembered that I was allowed to walk outside with an open container or else I wouldn’t have left two of these bad boys in the fridge when we checked out Tuesday morning.

Have a good weekend and remember to have a #SippyTimeBeer! – Kevin