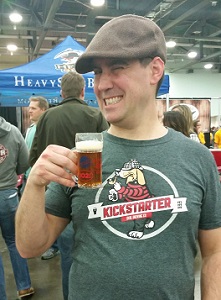 There are a couple things that I need to note about this year’s trip. As usual, I avoided local beer since I can get it on the regular. I love the brewer’s here. I was also glad to see more of them at the event than the previous two years. I still skipped them. The other thing was that the brewers in attendance seemed to have more specialty or limited beers to try. I tried as many of those as possible so let’s get into the reviews.

North Coast Brewing Co. – PranQster – We ended up near their tent after entering an enlarged area in the Columbus Convention Center. PranQster was a specialty beer but it also caught my eye because it is a Belgian Golden Ale which is a style I have only had at Staas Brewing in Delaware OH. This one wasn’t as champagne-y as that one but it still had a nice light body and fruity taste along with the requisite Belgian yeast flavor. One thing I tried to avoid after a disastrous Beer Fest last year was going high ABV. This one was one of the higher ones at 7.6% but I kept it under 10%. The IBUs for this beer are 20 so no bitterness to be found.

5 Rabbit Cerveceria – El Bizarron – This beer is so limited that 5 Rabbit doesn’t even have it listed on their site. It is a porter brewed with caramelized plantains. I love porters. I love plantains. I love this beer. It was my favorite of the night. It was another beer though that was testing my ABV limit by going to 8.8%. It also had a decent enough bite in it to offset the sweetness of the caramelized plantains at 35 IBU. It’s good enough that I may consider going to Chicago to try more of their beers.

Heavy Seas – Cutlass – I was going to try their limited edition beer but decided to skip it when I realized it was a Session IPA called Cross Bones. I was more than happy to try one of their standards though. Amber lagers are right in my wheel house especially when the IBU is at 15.5. You just get the sweetness in this one and luckily it isn’t too sweet. I backed down to 5.25% ABV so my mission of not getting trashed looked better.

Anderson Valley Brewing Co. – Blood Orange Gose – I was expecting The Kimmie, The Yink & The Holy Gose but it wasn’t on tap. Blood Orange Gose is in the same Highway 128 Session series of beers though. It was certainly the most interesting beer of the night. It had a great taste from the blood orange, a favorite since my days in Italy. It is kettle soured so that brings a whole different flavor to the table. If you like sour beers, give this a try.

Christian Moerlein – Handle Bar – This beer is also not listed on their site. It also veered away from my low ABV mandate. I’m guessing at the ABV because I didn’t see it listed but it was a double stout which is a sure 8.0% or higher. Not the smoothest double stout I’ve had but had a nice coffee perk to it. The thickness was spot on though. It was quite a good beer which I hope starts to get distributed. 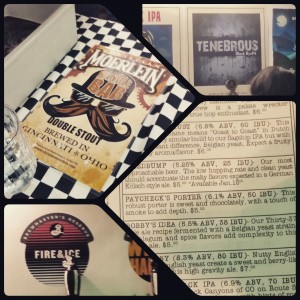 Brooklyn Brewery – Fire & Ice – This beer is part of their Brewmaster’s Reserve collection and is a smoked oatmeal porter. The oatmeal gets busted out more for stouts than porters but they are similar style beers so it makes sense. They use beechwood to smoke the beer and as has been getting more prevalent, a light hand has been used. It wasn’t too light on the ABV at 7.2%. They didn’t list an IBU but there wasn’t much bitter about this beer. This was another excellent beer.

Destihl Brewery – Tenebrous – In my avoidance of high ABV beers, IPAs got the short end of the stick. Since I’ve been coming around to rye beers, I do enjoy a good black IPA and I found one with an ABV of only 6.1% ABV. It wasn’t too bitter at 74 IBU either. At 8 ounces per pour, I will admit that things were getting a bit foggy at this point of the night. This beer marked my fourth (if you go by the 12 ounce standard) of the evening. I liked it but from here forward, I’d like to re-taste them.

Fifty West Brewing Co. – Paycheck’s Porter – This company was a new one to me. It’s out of Cincinnati so their beers could well be up here in the future. This beer was another that had a hint of smoke in it which was less prominent than Fire & Ice. Even though Fire & Ice didn’t list IBUs, this one comes in at 50 which is high for a porter. It has decent punch at 6.1% ABV.

Founder’s Brewing Co. – Red’s Rye IPA – The remaining beers on my list were all from companies that I enjoy. This beer is a draft special if you believe their so a Beer Fest is a perfect time to try it. Founder’s said there was a grapefruit flavor in it but I didn’t get it. It is supposed to cut the hops which comes in at 70 IBU. It’s certainly not the hoppiest beer I’ve had but it tasted that way.  I also didn’t get belted either as this beer is 6.6% ABV.

Coronado Brewing Co. – Devil’s Tail – This beer is part of their Crown series in which they collaborate with different brewers. This one happens to be Devil’s Back Brewing in Virginia (which I will be driving past in a few weeks.) It is an IPA which again didn’t completely blow up my low ABV mandate at 7.5%. They decided to have matching numbers with 75 IBU. I didn’t get the citrus flavor for the second straight IPA. I wasn’t that big of a fan of this on either. 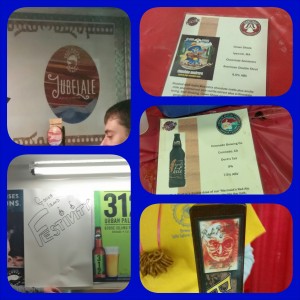 Clown Shoes Beer – Chocolate Sombrero – This beer is not a specialty beer. You can get it in a four pack so long as Clown Shoes distributes in your area. This chocolate stout has not only dark malts and obviously chocolate malts. To make it live up to the Mexican style of brewing, they add ancho chile, cinnamon and vanilla extract which are all ingredients in mole sauce. My beer soaked brain wasn’t exactly a fan of this beer even if I dig this company and their art work.

Goose Island Beer Co. – Festivity Ale – I know the festive season is over but this beer was considered special so I decided to try it. This beer is interesting because it’s a brown ale which isn’t a common base for this style of beer. My taste buds were pretty tapped by this point and drinking a holiday style ale is a bad plan since they have plenty of spices. The flavor was strong with hops too at 50 IBU. With such a malty base, it comes out significantly. I dipped back into the slightly heavy territory with a 7.7% ABV.

Deschutes Brewery – Jubelale –  I did myself no favors to end the night but diving into this Strong Ale. I had the same problems with this one that I had with the Festivity Ale which that it was super spicy and my taste buds were hanging on by a thread. This one had even more hops in it since it comes in at 60 IBU. I didn’t feel like any of it was fruity to help cut through the bitterness. The spices didn’t seem to do the cutting either. I’ll probably have to wait until the holiday season to re-try the last two beers.

It was another fun Winter  Beer Fest and I’m sure glad I didn’t puke on Ken’s driveway this year. Until next year, go out and enjoy a #SippyTimeBeer of your own. – Kevin