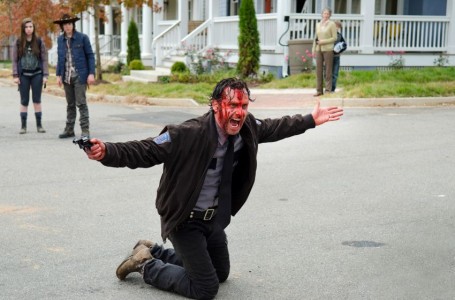 Jeremy:  Hey got an hour to spend spinning your tires?
Kevin:  I’m not sure the old Saturn can spin tires for an hour. Oh, are you talking about The Walking Dead?
Jeremy:  I enjoyed the episode. I would have enjoyed it more as a season opener not the second to last episode of the season.
Kevin:  I hadn’t thought of the episode that way, but it is certainly a valid criticism. I thought of it more as the episode that pounded into your head that in short order Rick is going to be proven right.
Jeremy:  He hasn’t been wrong in a long time. His spiral surpasses Shane’s outlook now but he isn’t wrong. The final scene stood out the most because it felt like something that should happen before the season ends. The rest felt like occurrences and pieces of plot for a seasons worth of storytelling. Carol would be the other exception.
Kevin:  I’m not sure why I hadn’t thought of the Shane comparisons myself. Maybe it’s because I’m hoping Jessie stops wearing frumpy clothes when Pete gets knocked off and I couldn’t toss Lori to the zombies quick enough. What a shit stirrer Carol is.
Jeremy:  I do find the “kill the abuser” jump in logic a bit extreme. it helps Ricks raging hard on obviously but damn. But don’t disagree, kill the dummy. The logic and survival argument though is interesting. He is a piece of garbage but the only doctor. How much do you put up with? This isn’t a normal existence so how far do the rules of survival go?
Kevin:  If you actually believe civilization is possible again, then you need to keep the doctor around. But honestly, doctors are pretty useless in the scheme of things. Other than a successful amputation of Hershel, what has a surgeon done? The doctor in the Atlanta hospital helped but it was mostly from damage his own people did.
Jeremy:  I am assuming Pete is the surgeon that was supposedly goign to be able to help Noah with his limp? If so, he must have a sweet set up. Seeing how seemingly anyone who gets hurt would get left behind he wouldn’t have much to do injurywise. They havent brought anyone else in since they have been there, whcih timeframe please? so what does he actually do?
Kevin:  Ha. Another point I hadn’t thought of. Alexandria did admit to not bringing in many people and they haven’t even given you any idea of how many people are in town. If the fight between Rick & Pete was any indication, there’s a dozen people living there.
Jeremy:  Right, people came out to watch, which apparently doesn’t change, but there were no adults it seemed.The wife and the child are the only ones trying to break it up. At least Carl just got pushed back but Jessie got the slap. Not that I believe it will be explored but the other townspeople have to have an opinion of it, which could lead to a split on Deanna’s leadership.