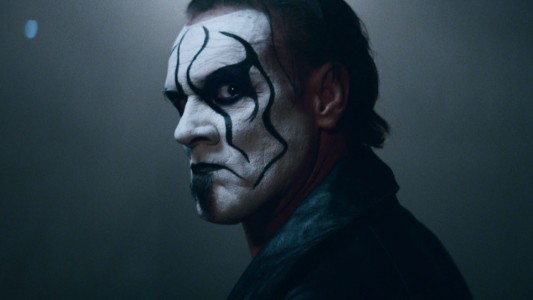 So it’s the last Raw before Wrestlemania. Time to enjoy a bunch of mind numbing matches and video packages galore.

Sting gets to not acknowledge TNA on live TV at the top of Raw. I’m glad he’s there to take HHH down. Stephanie gets the job to confront him. I like the idea. Sting hits her in a region everyone does. Steph is hitting her marks with her insults. Steph goes for a slap but Sting grabs her arm. HHH comes down and rolls up his sleeve. Steph gives HHH the sledge hammer with a grin on her face. Sting pulls out his bat. HHH backs down. He teases going back in but Sting had his shirt on so he didn’t. Exactly what it should have been. As a side note, I picked the above picture this afternoon not knowing Sting would start the show.

Dean Ambrose & R Truth are battling Stardust & Luke Harper while Bad News Barrett is on the head set. Nothing happened before a break. I was busy talking to the Lady to type anyway. R Truth got the pin fall and Dean Ambrose knows how to break dance is what I took from that match. Again, it served it’s purpose which is all this show will be. Nothing more. Some things will be more well done than others.

The Miz & Damien Mizdow get to “interview” Will Ferrell & Kevin Hart because the WWE wants as much heat as possible on Wrestlemania. I don’t think Ferrell & Hart wrote that segment. (Next Day Note: After Jon Stewart’s segment went well, don’t you think you should let other comedians write their skits? Maybe Ferrell & Hart aren’t into wrestling as much.)

Bill Simmons gets to announce. Holy crap, even Jon Gruden is weighing in on the Andre The Giant Battle Royal. The WWE is really getting the ties into Wrestlemania. There’s a ten man tag match with people in the Battle Royal so the announcers need to be the center piece. Simmons & JBL feuding is the main point. I could care less. Dusty doesn’t need to watch this to know it’s a train wreck. Ryback got the pin fall on the Miz.

Randy Orton is taking on Seth Rollins and J&J Security because people want to see the same match on Sunday. Randy Orton pinned Jamie Noble. We’re just here for the hype. It’s got to be one of the worst Raws to attend. Nothing of significance happens. John Cena gets a sit down interview.

Paige & AJ Lee kind of, sort of argue over the Divas Title shot that Nikki is offering on Raw tonight. AJ thinks it’s a trap to which I say “Duh.” Paige is taking on Nikki though. Brie Bella gets to be at ring side. Nikki is in control of the only match so far not to be a farce. Paige starts to mount her come back after the break. Nikki back elbow and drop kick. Paige dodges a clothes line and super kicks Nikki. Paige gets rolled up with a Ram-Paige attempt. Paige kicks out of an Alabama Slam. Ram-Paige only gets a two count. Nikki & Paige spill outside. AJ cuts off Brie. For some reason, AJ back elbows someone who patted her on the shoulder. Nikki fore arms Paige and rolls her into the ring. Rack Attack for the win. They end up brawling but get pulled apart. Nice dissension set up for a win that looked sure for AJ & Paige just three weeks ago.

Snoop Dogg is on. Curtis Axel comes out to interrupt Snoopmania. Axelmania is here to stay. Snoop calls on his buddy Hulk Hogan. I’m not sure whether I think giant playing cards for an outfit is a good thing or not. It’s definitely different. After a dressing down by the Hulkster, Axel rips off his shirt. Hogan blocks a punch and knocks Axel down. Snoop gets to toss him from the ring. He had a better segment than Simmons.

It’s ridiculous that Wrestlemania pre-show starts at 5. The tag team match is on it so I may or may not catch it. Cesaro, Tyson Kidd & Natalya are taking on Los Matadores and El Torito while the Usos are on the head set. Hypedy hype hype. El Torito kicks out of a discus clothes line. El Torito reverses a power bomb into a roll up for the win on Nattie. Kane wants the IC Title so badly that he threatens to have Bad News Barrett stripped of the title. It does seem awful early to take the title.

I somehow don’t fast forward thru Rusev vs Jack Swagger Round 10. “We want Lana!” Michael Cole covers with Rusev being upset at her and not “We poorly timed a main attraction’s appearance in a movie that will have less eyes than Wrestlemania.” Rusev is taking entirely too long to beat Swagger. Jack even mounts a come back. Booker says “Swagger’s really been studying Rusev.” No mention of their previous feuds. Just wow. Rusev won’t let go of the Accolade. John Cena comes down and makes the save. They brawl. Rusev tosses Cena back first into the barricade. Rusev slams his back against the ring post. Cena then gets tossed over the announce table. Rusev kicks Cena after he starts to recover. I thought Cena would win this match. This ass kicking confirms my suspicion. Rusev locks in the Accolade on the announce table. Cena passes out. Hy-pe.

Bray Wyatt comes out for one last speech. I hate the person I have become according to Wyatt. If I’ve got esteem issues, it’s likely of the other variety chief. The Undertaker is a liar. The Undertaker is guilty. He will be the new Face of Fear. Hhhyyypppeee.

More famous people are shown but they don’t acknowledge Paul Stanley who is in every shot with the announcers which is more than normal because of thee, umm, hype. Kevin Nash is the last inductee into the WWE Hall of Fame. By the way, is Scott Hall supposed to feel bad that he got inducted as Razor Ramon now? That is a huge class. They act like they’re running out of options. Tyson Kidd and Natalya are in a dumb skit about chicken fries at Burger King. She has to pretend like they’re good.

Dolph Ziggler vs Daniel Bryan with Dean Ambrose as special guest referee. This match will be good but they don’t have that much time unless this show goes over really long for the face to face. Funny that they botch a few text book holds in a row. Not the slick match they were hoping for. Ziggler plants Bryan with an X Factor from the top rope. Ambrose is counting fast for both men who traded falls. Bryan charges into the corner. Ziggler catches him with a super kick. Ziggler hits a Zig Zag for a clean win. Dean Ambrose hits Dirty Deeds on Ziggler. The rest of the ladder match hits the ring. They all fight over the IC Title which is already above the ring. Train wreck to end the Hizype.

Brock Lesnar and Paul Heyman are out to the ring first. Heyman hypes the Network and his champion. Roman Reigns comes down to ring side. Lesnar puts the title in his face. Reigns snags it. They fade out with them struggling over it. That’s pretty sissy for two big tough guys. Hype though. – Kevin