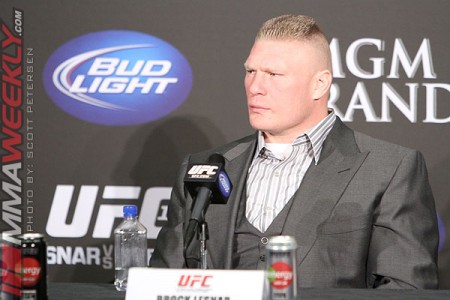 I think everyone realizes this is taken from mmaweekly.com

Jeremy & Kevin lead off the show with the big news that broke right before they record which was Brock Lesnar shutting down speculation he would head to the UFC and saying that he re-signed with the WWE. How does this affect the outcome of the main event at Wrestlemania? Does it make the sissy fight over the WWE Title any better at the end of Raw? It was preceded with the magnificent Paul Heyman which only made the drop off of quality more noticeable. Jeremy & Kevin aren’t here to preview that match for Wrestlemania. That match is for Stunt Granny Audio 294 later in the week. They turn their eyes to the only Divas match on the card, AJ Lee & Paige vs The Bellas, who aren’t twins any more unless you talk to Booker T. Will the Give Divas a Chance movement end at Wrestlemania? John Cena may be at the root of Nikki’s strong style but will he be displaying his own against Rusev on Sunday? How much did Jeremy enjoy Rusev’s training video? Is the outcome to this match a no brainer? The Bray Wyatt vs Undertaker match has been held up by Wyatt since the beginning. It’s fine to have the Undertaker not appear, but shouldn’t they have done something more for Wyatt to play off of in his promos? The last match in this Wrestlemania preview is about the Intercontinental Title. Does R Truth deserve the belt since he has entertained us for the last month? Does Dolph Ziggler pinning Daniel Bryan ensure the later’s victory at Wrestlemania? How amusing would it be for Bad News Barrett to give us some bad news on the Raw following Wrestlemania? It wouldn’t be as entertaining as this podcast so click on the link below!