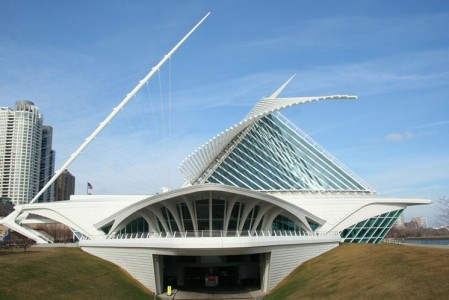 The IST Building from Florida Polytechnic designed by Santiago Calatrava. Picture from Tampabay.com

During Wrestlemania, I thought it was really stupid to have Sting lose to HHH. Not only would that have made sense of HHH leaving the ring this past Monday, it would have made sense that Sting continues to be a thorn in the side of The Authority. Now, it doesn’t make a lick of sense. At least Sting is trying to drive a wedge between HHH and Seth Rollins with his promo. Solid stuff out of a non-promo guy. Either the crowd doesn’t have microphones facing it or they also think this makes no sense. Seth Rollins immediately tries to drive a wedge between himself and The Authority, specifically Stephanie who is reversing course from what they said the last few weeks. I’m so lost.

What in the hell is Lilian Garcia wearing this week? It’s somehow more hideous than Lana’s new outfit. Dolph Ziggler is a douche for sending out those Instagram pictures. Why is Rusev wearing a matador’s coat down to the ring? Are we trying to have a worst outfit contest? As with a vast majority of multi-segment matches, nothing important happens before the break. Ziggler is in sell mode. Rusev misses a corner splash which is becoming entirely too common. At least I understand the over use of the suicide dive. It has a cool visual. The Stinger Splash does no such thing for me. Rusev pulled out a new kick and a front flipping senton today. Ziggler super kicks Rusev out of the blue. Rusev rolls out of the ring after a two count. Rusev takes advantage until he misses a shoulder and crashes into the stairs. Both barely beat the ten count. Rusev super kicks Ziggler. Dolph plays dead to get out of the Accolade. He reverses into a Zig Zag. Summer Rae interferes to cause the DQ. Just what I wanted, more of this feud. (Hint: There may be some sarcasm in that statement.)

Dolph Ziggler pretends like it will be the end of the feud. Summer Rae sneaks into Ziggler’s locker room while Renee Young keeps reading the telepromoter. Shouldn’t the camera man or producer alert her that Summer Rae is sneaking around in back? Nikki Bella gives us the Bellatron which is a count down to her record title win. I’m starting to think that this Tampa crowd just sucks. Alicia Fox is taking on Becky Lynch in the first beat the clock challenge. Thankfully, Lynch’s inset promo make her out to not be the goofy pet racoon of Team P.C.B. I’m mystified by JBL going with “They all have their own egos” line of thinking considering the WWE is clearly pushing the team aspect of all of the Divas groups. Becky Lynch wins with the Disarmer at an alarmingly short 3:21.

Ryback cuts a half decent promo about his match up with Big Show. It ends with Summer Rae running out of Ziggler‘s locker room. JBL exclaims “Ziggler has some ‘splaining’ to do.” We all saw her sneak into his locker room after he said he was going for a shower. How is this his fault? Isn’t she trespassing? The WWE may as well keep this angle terrible for even longer. The Miz is on the headset during Ryback vs The Big Show. The WWE is staying the course with many bad feuds. Just when you hoped their crazy, don’t remember anything from month to month would forget about this three way feud. Big Show grabs the mic and starts yelling at the crowd about the retirement chants. It only momentarily helps Ryback. Just as the announcers note Show’s dominance, Ryback makes a come back. Big Show spears Ryback to halt the momentum. The Miz jumps onto the apron which distracts the Big Show. Ryback Shell Shocks Big Show for the win. The Miz is happy.

Brie Bella is taking on Charlotte. I would imagine this means Paige takes on Nikki so she probably won’t win the challenge. If Charlotte doesn’t beat the time, my money stays on Lynch. Charlotte gets an in set promo too. She is a bit behind Lynch on the mic in my opinion. Charlotte wins with 1:41 left. She halved the time. Not good news for Paige. I can actually buy the announcers selling the “Brie took herself out of her game by trying to stall.” Score one for the announcers tonight. Renee Young gets to interview the Dudley Boys. They came back for the WWE Tag Team Championships. They want to be 10 Time Champions. Testify.

Kevin Owens is taking on Cesaro again. Owens takes a breather outside. Cesaro nails him with a running upper cut into the barricade. Cesaro though in text book form, shouldn’t be doing a cross body. It doesn’t say “power” to me or even make him looking like he’s flying like Superman. Owens nails a cannon ball in the corner. This crowd officially blows when a lame Cesaro/Owens chant happens. Cesaro kicks out before a break. Cesaro gut wrench suplexes Owens off the middle rope. When did it start to become the Gotch Neutralizer? Owens misses cannon ball number two. Cesaro counters a Tornado DDT into a Cross Face. Owens gets his leg to the ropes. Fun sequence. Cesaro gets hung on the top rope. Owens tosses Cesaro into the announce table. He has his out for another loss. Pop Up Power Bomb moments later for the Owens win.

Lana looks shocked at Dolph Ziggler. He was set up by Summer Rae. Nothing happened. Someone apparently thinks this is a good idea? Will this get him to change characters? I can only hope because this douche nozzle isn’t working. Braun Strowman gets a recap. Bray Wyatt gets a mic. He babbles as always. Braun informs us that it’s the Apocalypse. I’m shaking in my none existent boots.

Dean Ambrose comes to the ring then has to wait for his back up to come through the crowd. Strowman is his opponent. Ambrose takes the straight ahead approach. It fails. Ambrose is getting his head crushed on the barricade when Roman Reigns starts woofing at him. Strowman pushes him. Reigns attacks for the DQ. Strowman takes out both of the with a modicum of help from Luke Harper. Strowman’s Side Flip from the Shoulder is possibly lamer than the Shell Shock. It really makes you wonder who Reigns & Ambrose will bring in because they need to be sold, big time. I’ve seen Samoa Joe suggested but he doesn’t fit the bill to me.

I really hope Paige doesn’t beat Sasha Banks in less than 1:40 unless some serious shenanigans happen. Paige gets an inset promo too. Her character has been more consistent and less crazy. Good move. Paige goes for an early pin. Sasha is still wearing entirely too much paisley. Paige gets in a timely knee. Sasha gets caught doing a head scissors. Ram-Paige but Tamina & Naomi pull Sasha out of the ring. Paige doesn’t beat the clock. Almost as bad as Sasha being pinned.

Renee Young gets to be a gossip reporter tonight. Summer Rae said that she was invited into his locker room. He undressed in front of him. She acts like she was turned on. Now, if Lana had half a brain, she’d know this is a Rusev plan if he doesn’t freak out. That’s the second part of selling this angle they won’t do.

Xavier Woods has gone straight hair on us. They try to shame all of us for enjoying tables being broken. New Day has a special table because it’s the last one here. Woods calls the “Table poachers.” They continue to be an enjoyable act.

The Dudley Boys entrance music doesn’t seem right to me. The Prime Time Players are on the head set again. Please, I’m begging the WWE to give them a regular promo. Pretty please with a cherry on top? Did Kofi Kingston add the Mercury flames to his boots this week? Break. New Day is taking it to Devon. Woods is killing me brushing his hair. Big E & Kofi continue to tag in and out and wear down Devon. Bubba gets the hot tag. Woods gets brought into and out of the ring by his hair. 3D on Kofi Kingston for the win. That was quick. Not the match itself but inserting the Dudley’s into the title picture. Devon goes for the bubble wrapped table. Woods pulls Big E out of the ring to save the table.

Seth Rollins comes out for the main event. He wants to know where his statue is. Stephanie answers the challenge. She only chides him for talking about her husband. John Cena answers the second challenge. I had forgotten he wasn’t on yet. He tells Rollins that he is expendable. Cena warns him that the only reason the Authority picked him is because he’d stab someone in the back. Rollins is buying their BS. The Authority said all titles were on the line at Night of Champions. John Cena challenges Rollins to a US Title match at NOC. Stephanie grants the match through tears. – Kevin