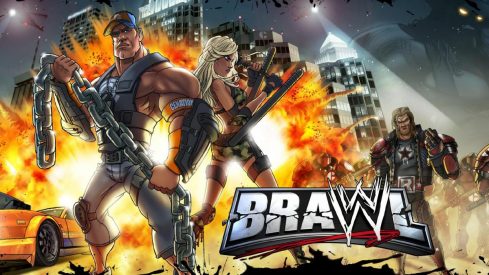 Before the match even started, I had forgotten that Percy Watson was one of the announcers. I’m pretty sure that didn’t happen long ago. IO should really remember. Ember Moon vs Liv Morgan – I hadn’t seen Ember Moon wrestle before. I enjoyed her work. Her opponent didn’t appear to be a slouch but needs some more polish than Moon. Moon’s finisher is awesome.

Andrade “Cein” Almas gets a question about Roderick Strong who shows up in short order. Strong chases off Andrade long enough for Andrade to get a cheap shot in then gloat over Strong. My favorite part of this segment was before it when Tom Phillips called Strong “Up & Coming.” He’s been in wrestling five times as long as you, Phillips.

DIY/Authors of Pain vignette with “Precious” Paul Ellering. I always liked Ellering and they seem to be using him to great affect. It’s a good under sized baby face team against the big bad bully heels. Keep It Simple Stupid works.

No Way Jose taking on Kona Reeves. I hadn’t seen much of Jose before I stopped watching for a span. He seems like an okay wrestler. Pop Up Uppercut for the Jose victory. The loser again, Reeves need some more work. That’s okay, that’s what NXT is for. Elias Sampson comes out at end to start a feud with Jose.

Chris Adkins took on Eric Young with Sanity. Tye Dillinger got a back stage interview before the match started. He’s ready to pick them off one by one. I’d suggest you get back up, call me crazy. Young makes short work of Adkins despite the size disadvantage. Adkins is the hat trick of losers to need work.

Bobby Roode vs Shinsuke Nakamura vignette. Should be an interesting and well wrestled match. I could see Nakamura going to the Rumble if he loses. And honestly, I could see Roode getting in there too if he loses.

Peyton Royce & Billie Kay come out first. They get to mock their opponents. I find them quite grating, not in a good way. Nikki Cross came out second. I like her demeanor. Asuka came out guns blazing. Royce & Kay rolled out of the ring. Cross & Asuka showed down but Royce & Kay attacked from behind. Cross & Asuka pitched their assailants then went at it. It was one of the more fun brawls I’ve seen in a while. Cross & Asuka were even beating up male security guards. I love it. – Kevin DiFrango