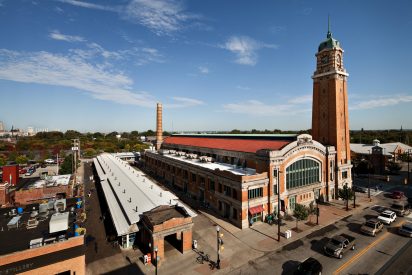 The WWE starts us off with Roman Reigns and the dreaded shark cage. He’s ready to win because Chris Jericho will be in a shark cage. Kevin Owens comes out with the aforementioned Jericho. He takes a long time to say he’s the only person to put Reigns thru an announce table. Reigns is still ready to whoop ass. Jericho flubs up a few times uncharacteristically. Jericho is ready to take on Reigns tonight. Reigns wonders if it’s a rematch for the US Championship. Owens ends up offering the match to Reigns much to his chagrin. Someone is going to be locked in the shark cage during the match.

Cesaro comes out for a match with his partner Sheamus. He is taking on Luke Gallows with Karl Anderson at ring side too. The most significant thing to type about is Sheamus chasing Anderson from ring side during the break. That gives Cesaro some momentum. Sheamus clothes lines Anderson on the outside while the ref is distracted with Cesaro. Anderson comes out and drop kicks Sheamus into the apron. The referee is distracted with Anderson whil;e Gallows taps to the Sharpshooter. Cesaro lets go, swings at Anderson then gets super kicked by Gallows. Swinging Flap Jack for the Anderson win.

Mick Foley is talking to Stephanie McMahon over speaker phone. Sami Zayn comes in. He gets a match against Seth Rollins to qualify for the Royal Rumble. There is some special stipulation for Rollins that doesn’t get heard when he picks up the receiver.

Corey Graves sat down with Bayley for an interview. She explains her experience with “Wow!” She realizes she’s come from the small time to the big time. Bayley doesn’t understand why her fandom is being called into question. It’s gotten her to this point, wrestling for the Raw Women’s Championship. She remembers being a fan and wants her fans to remember her interacting with them because she remembers her interactions with past stars. She doesn’t have the DNA of Charlotte, but she’s already beaten her twice so she’s ready to beat her at the Rumble.

Foley informs Seth Rollins that if he doesn’t win the match, Sami Zayn gets his spot in Rumble. Rollins knows he has to win tonight, then win the Rumble to shove it in The Authority’s face.

The match between Rollins and Zayn was after the break. Rollins is working over Zayn’s shoulder. Rollins gives Zayn an enziguri after a failed charge. Zayn reverses into a Blue Thunder Bomb. Rollins kicks out at two. Zayn catches Rollins charging with a back elbow. Zayn gets a two count from a Michanoku Driver. Zayn goes to the top rope but it results in a Block Buster from Rollins after some reversals. Rollins side kicks a kneeling Zayn. Rollins covers after a Falcon Arrow but only gets two. Rollins catches Zayn with a jumping knee. He follows with Sling Blade. Zayn counters into a tornado DDT. Rollins dodges a Helluva Kick but gets tossed outside going for a Pedigree. After much wrestling, Zayn power bombs Rollins from the top rope. Rollins kicks out at two. Zayn gives Rollins the Exploder suplex into the corner. Rollins rolls outside to the apron. Zayn follows but gets Pedigreed on the apron. HHH’s music hits. No one shows up but it distracts Rollins. Zayn rolls up Rollins for the win.

Seth Rollins is pissed about being screwed out of his spot. Mick Foley says that someone was in touch with the production truck. Rollins is still angry.

Mustafa Ali is introduced in a six person match. This is how the WWE is treating the cruiser weights. He doesn’t even start the match. When Ali does get in, he plays to the crowd like he should be but he gets nothing. Ali’s finisher is a reverse 450 which is pretty damn cool.

New Day gets interrupted by Enzo Amore & Big Cass. They don’t get very far until Rusev shows up with Jinder Mahal & Lana. It seems to be everyone’s moment to declare being in the Rumble. Titus O’Neil makes the segment funny because Xavier Woods makes him the butt of multiple jokes. We end up with an eight man tag match involving Braun Strowman. After a mess of a match (what six man isn’t?) Strowman wins with a power slam on Enzo. Big Show then comes out. They have a stare down. Strowman screams “We’ll do this on my time.”

Jericho and Reigns have their match at the 10 PM spot. Reigns gets a Drive By in much earlier than expected. Owens joins the announce booth. Jericho gives a long distance high five to Owens after a nice looking drop kick. Reigns really has dominated this match though. I have no idea what happened, but there was a seriously blown spot. Oh my, was it a Samoan Drop gone wrong? Jericho’s best offense again, a drop kick. Reigns connects with a sit down power bomb. Owens storms down to the ring. Superman Punch just before Owens attacks Reigns for the DQ. Owens gets the shark cage lowered. They shove Reigns in but he ends up bouncing both of their faces on it before leaving the cage. Reigns locks Owens in the cage. Jericho hangs onto the cage. Reigns Superman Punches him again. Reigns spears Jericho too. So Owens keeps the Championship on Sunday?

Jericho & Owens are still in the ring. The new interviewer tells Owens that his match with Reigns is also No DQ now per Mick Foley. They request the match to be cancelled.

Graves had a sit down with Charlotte too. She recalls her father winning the 1992 Rumble. So now you approve of your father? She could be winning championships anywhere but she chose the WWE. Charlotte is mad that Bayley has even looked at her Title. Charlotte is going to punish Bayley on Sunday. This angle got fleshed out finally. It took them long enough.

I do not care that I FFed Nia Jax‘s match. It was a squash as usual. She takes the mic away the new announcer. She insults Sasha Banks who comes out. Banks attacks with her crutch. She gets in double knees but Jax recovers quickly.

Noam Dar comes out with Alicia Fox. His opponent is Rich Swann. Dar started off ahead but Swann finished things off after a flurry with his Swinging Super Kick. How does that move not have a name? What an over sight. It’s a finisher. Swann tells Neville to come out so they can finish things tonight. Neville jumps on the apron then retreats. Swann suicide dives on him. Neville does a full retreat.

Cedric Alexander is ready to be the Cruiser Weight Champion. For some reason, he thought Dar & Fox wouldn’t interrupt him. Alexander is fine with Dar stealing Fox. Cedric does have a problem with the attack from last week. He shoves down Dar, who sells it.

Goldberg trips over his lines three times. Wow, that was brutal. Paul Heyman doesn’t screw up. He does introduce Brock Lesnar. Heyman holds him back. Goldberg tells Lesnar he looks like an idiot standing up there. Lesnar comes down. Just as they face off, the bell tolls and the light goes out. The Undertaker has a stare down with both of them. Bell tolls again, Raw goes dark. Nice. – Kevin DiFrango