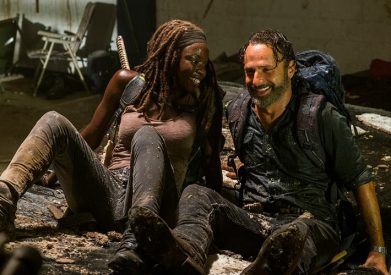 Jeremy: Speaking of stupid easy, my god writing that episode of The Walking Dead must have taken 15 minutes.

Kevin: I know the last time the WWE had a PPV, I said I didn’t want to watch TWD afterwards. Well, they made it easy to follow along after Fastlane. It was nice to learn something of the dynamic of Michonne & Rick, but they still didn’t go that deep into what makes them tick. Unless it’s just sleeping with each other because they made that abundantly clear.

Jeremy: All I got from this episode is that they are goign to drag the central conflict out until next season. The convenience of the school or grounds with food and guns only to have the Junkyard Gang say it isn’t enough was a groan inducer. It is , I believe,  half way through the season by now.  I get that Rick is dragging his feet because he is afraid of losing Michonne and knowing more will die but  damn get a move on.

Kevin: I was somewhat amused by the negotiations between Rick and Jadis but that seemed kind of silly too. If 63 guns isn’t enough, why not stipulate a number of guns you wanted in the first place? It’s not like you can go to the store and buy them.

Jeremy: I am figuring there is more there with this than their simple agreement. I did like how he offered 10 guns and she kept relenting then he says 20 and a cat. I was lost on the cat. I just didn’t like the silliness with Michonne and Rick. I liked that they were confident and back to borderline arrogant but the awful, terrible awful, terrible CGI Deer killed me. Then the fake out with Rick being eaten which, by the show rules, you know it wasn’t Rick. But the end all groaner was Rick tossing Michonne her sword like a hack action flick.

Kevin: I can’t more accurately describe that scene. I know you’re supposed to get invested in Danai Gurira’s performance when she’s horrified but when the writers of TWD have pulled this stunt more than once, you and the rest of the audience knows it’s a misdirection so you can’t get invested.

Jeremy: It was so hammy that even her revelation later that she can’t live without Rick was tainted. “Yeah we get it.” is all I was thinking. I did like the lead in as they showed them living their life away from Alexandria and the rest of the people and problems.

Kevin: Those problems were almost more interesting than Michonne & Rick who chewed up the vast majority of screen time. I honestly can’t believe the level of stupidity between Rosita & Sasha.

Jeremy: OK this half season has deviated form the comics quite a bit and that is good but I can see where this is going. They are substituting characters form the comics with characters from the show.  Rosita though is just annoying now as the attitude has come out of nowhere. She was such a  blank slate that any sort of character development seems forced. At least with Sasha she had already put something in motion with Jesus.

Kevin: I do think Rosita is the worse of the two. She was only pining to fight the Saviors. Rick finally changes his mind about doing so and she starts pouting even more. Plus, it seemed odd she teamed with Sasha since Rosita has been giving her the cold shoulder. I believe it was earlier this half season with a comment like “We’re not besties since the guy we were both sleeping with died.” So why are you besties two week later?

Jeremy: It was when they went to the Kingdom. Rosita knows she needs a sniper and Sasha is the best they have so it makes sense tactically. So were we supposed to take from Tara that she knew Rosita was going to Hilltop or was that a coincidence?

Kevin: I’m not sure what we’re supposed to take from that ninny Tara who has to talk to a child to make up her mind about something that is a really easy decision. She did argue with Rosita so she’d have a better idea of what Rosita may be up to but Rosita also seemed to be wondering off on her own anyway.

Jeremy: When Rick asked her why she was at her house I was wondering. The way it was edited was supposed to throw you off a bit but it seemed like she was looking for her only. I do like the growth with Tara at least. She is going to tell Rick instead of letting it come out and then have to explain. So that baby was Judith? Did they have a time machine one?

Kevin: I was assuming that Tara told him about Seaside but you are right that Rick asked about Rosita so she could have deflected about them. Tara’s character conflict makes some sense. But she knows Seaside has guns and doesn’t like The Saviors so it should be a no brainer.

Jeremy: I find.that potential meet up interesting at least. Seaside doesn’t want outsiders. How do you convince them to help? At least that is interesting unlike this week. Also, another thing totally uninteresting is Braun Strowman losing to Roman Reigns clean and out of the blue. It’s like Rick stabbing a walker in the head only to have the Walker come back and bites Rick 5 minutes later. Why kill Braun’s momentum for that dick bag Reigns? Have a DQ. Have a count out cause they tore the ring literally down. Not that dumb shit. So watched Walking Dead then had to sit through that bullshit.

Kevin: I thought the WWE did a solid job of selling Strowman’s over zealousness costing him in that match and not Reigns beating him. 3 ring posts and a missed splash.

Jeremy: Dude he just power slammed Roman through the the announce table. Literally the next move for Roman is spear that nearly pins Braun. Fuuuuuuuuuuuck that. I think the combo of Walking dead and that travesty has set the tone for the week.

Kevin: Ha. Plenty of time for Strowman so I’m not going to get all bent out of shape about it. The WWE rarely changes plans for Wrestlemania. Of course them making those changes was part of the reason “Yes-lemania” with Daniel Bryan was so memorable. I understand you couldn’t play Strowman in the same role as DB though. You also can’t have Strowman in the mix with Goldberg and Brock Lesnar so you get what you got.