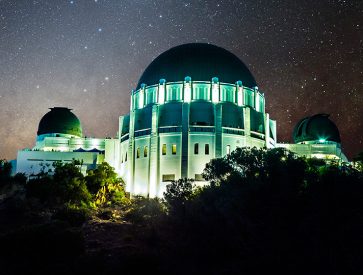 Saved from discoverlosangeles.com. They borrowed if from johnwesleymander flckr. It’s the Griffith Observatory in Los Angeles.

The Miz gets to kick off the show with Bo Dallas & Curtis Axel. He crows some about his victory over Jason Jordan. He then invites out Roman Reigns. He now respects Cena because of what he did for fifteen years. He’s proud of his victory over Cena. The Miz says that he’s the one with the championship. Reigns tells him that he wouldn’t have retained without the Miztourage. He then laughs off a Shield vs Miztourage match. As he should have. Reigns is going after the Universal Championship. The Miz talks about how he’s made Raw “Must See” and he feels disrespected that Reigns doesn’t want his championship. Reigns is ready to go. The Miz begs off. Kurt Angle comes out and makes the match. He also makes Dallas & Axel vs Matt Hardy & Jason Jordan.

Poor Booker T has to pretend that Hardy & Jordan can’t make a good team. Both of them have been tag team champions. Why couldn’t they? Maybe he isn’t pretending because now he thinks he “needs to get his moves in.” Booker follows up by giving The Miz tough love about not having a night off in this business. I’m so confused by his view point. I just lost what I had written trying to put the picture in. Stupid. Booker continued to harp on Jordan as being a spot whore when he speared the Miztourage in the corner. Hardy hit a Twist of Fate for the win on Dallas. Usually if talk bad about someone, there’s at least a partial truth in there. Booker has got nothing backing up his opinion.

I skipped the Brock Lesnar vs Braun Strowman video package. Michael Cole got to have his wacky announcer moment by carrying on his love affair with the music of Elias Samson. He is in a rematch with Apollo Crews. Booker T kept the crazy train coming by saying “It’s not a sprint. It’s a marathon” as this match ended quickly. Samson caught Crews coming back into the ring. Samson gave him a neck breaker for the win. I’m just wondering if the announcers are all punch drunk.

Curt Hawkins doesn’t add to his losing streak but he did get his ass kicked by Braun Strowman. He wanted more competition so Dean Ambrose was sent out. I haven’t looked at the roster but I’m guessing it’s kind of thin if Ambrose is the credible opponent for Strowman. Ambrose does fight back. He even got in a DDT on the outside mats. Strowman rams himself into the post. Ambrose gets caught going for the top rope elbow. Power Slam for the win. That match was better than the one Ambrose had with Lesnar.

Enzo Amore talks to Kurt Angle. He really gets to play a schmuck asking for a celebration. And the crowd seems to love it. He also turns down Angle’s free advice to really schmuck it up.

Seth Rollins has a talk with Dean Ambrose. He tells him the match was a bad idea. Rollins would like him around for when he takes on Cesaro. Rollins then tells us he’s going to take on

Alexa Bliss is not happy with the crowd for not appreciating her. Mickie James comes out to challenge her since she hasn’t beaten her on Raw. I don’t remember their matches as being good before.

They show that ghastly injury Cesaro took last night. To no one’s surprise, he needs surgery. Sheamus is Seth Rollins opponent though. Rollins gets in some small doses of offense but Sheamus works him over with his power. Rollins back drops Sheamus outside the ring. He gets the worse of the exchange though including a knee to the face. Cesaro distracts him after that so that Rollins can recover. Sheamus gets caught coming off the top rope with a super kick. Rainmaker Knee for the win.

Finn Balor runs into Goldust. He is mad that Balor called him a victim. Balor apologizes for his words. Goldie then sucker punches him. I’m already more excited for this feud than the Bray Wyatt feud.

Roman Reigns and The Miz have their match in time for the Miz to still be home early to be with Maryse. Bo Dallas helps The Miz gain the upper hand but it’s an ass kicked otherwise. Reigns sets up for a Superman Punch. Dallas & Axel distract him. Miz’s clothes line in the corner. Miz gets in “his” kicks. Superman Punch on Miz. He rolls out of the ring while Reigns dispatches Dallas & Axel. The Miz DDTs Reigns coming back into the ring. Miz goes for the Skull Crushing Finale. Reigns Spears him for the win. Lots of cheers. Kind of funny. Dallas & Axel attack Reigns. He fights off all three of them. Reigns goes for a power bomb on Miz. Dallas & Axel attack with chairs. Skull Crushing Finale. Reigns gets back up. The Miz comes back and attacks with a chair. Another SKF on a chair this time. They do the Shield pose. I mean, this match up is a joke.

Finn Balor comes out for a match with Goldust. So I suppose this won’t be a feud then. Goldie takes control early. He works over Balor’s midsection. Balor then uses his midsection for a come back. He didn’t get the suplex but it did start the chain of events. Coup De Grace for the win. We’re all lucky, Bray Wyatt isn’t done with Balor. (That’s so much sarcasm.)

Bayley & Sasha Banks are getting salty with each other. Sasha tells them to focus on their opponents. Bayley is ready to make Nia feel her pain.

Enzo needs a no contact clause if they attack him during his celebration.

Nia Jax & Emma come out. Can you guess which one of those two got their entrance on TV? I thought so. Jax starts the match so the heels can gain the upper hand. Jax works over Bayley’s shoulder. Emma tags in so that Bayley can make a hot tag. Jax breaks up a pin. Bayley attacks and gets tossed. Sasha drop kicks Jax outside. They shove Jax into the post. Bayley tags in. A Top rope elbow gets aborted. Bayley to Belly for the win.

Enzo gets to close out the show. Could the rumors about him not being liked be any more false? Even stranger, he gets to mock all of the cruiser weights. Neville points out that he alienates everyone. He says Enzo was dumped on their door step because no one else wanted him. Enzo says he gave all of them eye balls on 205 Live. Enzo reminds Neville never sniffed this hour because yet again that he’s a star. Neville decides to attack Enzo any way. He forfeits his chance at the Cruiser Weight Championship. I’m still not going to watch 205 Live. I’m not a part of the more eye balls. – Kevin DiFrango