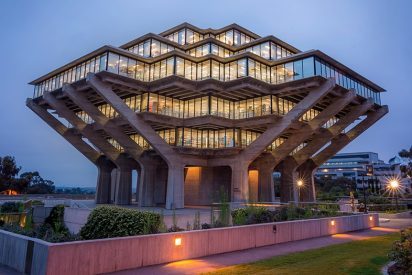 Geisel Library on the campus of UC San Diego. Designed by William Pereira in the Futurist Style.

The WWE starts us off with Vader Time. I hope they do a video package later. Kurt Angle is in the ring with Baron Corbin who of course has to give Jojo a hard time. Angle is ready to talk about Paul Heyman and Brock Lesnar when Roman Reigns comes out. Bobby Lashley also interrupts before Angle can say anything. They trade similar barbs as they did the previous week. Angle cancels the multi-man match at Extreme Rules. I’m not sure why both Reigns & Lashley aren’t acknowledging the post by Heyman that Angle did that had Lesnar insulting them. Lashley’s point seems especially bad in that light.

The Revival comes out for a second consecutive week of getting whooped. These matches still aren’t helping Lashley much. He’s taking too much of a beating if he is going to challenge Lesnar. Same can be said of Reigns after the commercial break. The Revival has done less than the B Team on Raw. Lashley gets a good hot tag to help him look impressive. Of course Reigns tags himself in. After a Superman Punch, Lashley tries to tag back in. It distracts Reigns who forgets who is legal. Dash Wilder rolls him up with a handful of tights in plain view of the ref. The Revival getting to brag isn’t as good as building up for Lesnar in my opinion especially since this loss will soon be forgotten about even in Revival promos.

The Deleters of World are still being cheered despite Matt Hardy‘s original gimmick being obsolete except for the physical trappings. Curtis Axel & Bo Dallas are dressed up as Hardy & Bray Wyatt again. Axel is having a match with Hardy. Matt gets out to an early start. He slips on the rope. Axel reverses in mid-air and gets the win. Hardy & Wyatt end up congratulating them. It was indeed as the announcers said, weird. This is not a way I’ve seen built up before.

The Authors of Pain are alive. Titus Worldwide tries to give them advice. They don’t want it. I don’t blame them.

Bayley is happy that Alicia Fox is back. Angle forces her into a six woman match for no apparent reason.

AOP is taking on the Gibson Brothers. They get man handled. This is what Lashley needs to be doing to someone. Last Chapter for the win. Titus O’Neil & Apollo Crews make a save.

Constable Corbin pointing out that the show sucks. Finn Balor wants a shot at the Universal Championship. He makes fun of Corbin’s vest. Braun Strowman comes in and wants to team with Kevin Owens. More “combustible elements” match for Corbin’s insolence.

Alexa Bliss has Mickie James by her side again. It’s kind of weird but this role is the best one for Mickie during her latest WWE run. The crowd is correct to chant “What?!?!?” because this promo about Nia Jax is confusing. Is Jax turning baby face again? She didn’t have enough time to establish being in the gray area. Natalya comes out and remind Bliss that Rousey comes back in 23 days. Nia Jax is being cheered so I guess that worked. Why not work the Rousey angle more around respect then? Natalya has a match against Bliss. James tries to interfere. Bliss rolls up Natalya but she kicks out. James distracts the ref. Jax trips Bliss. Discus Clothes Line by Natalya. Sharpshooter for the tap out victory.

Charley Caruso is talking to Seth Rollins. He wants to be better and surprise Ziggler and McIntyre this week.

The Riott Squad breaks a camera for a photo shot. Still not destructive enough for my like. They more a Mischievous Squad. Ember Moon & Sasha Banks are joining Bayley for their threesome. Moon gets to show off first. Good for her.  Don’t get stuck where Bayley & Sasha are. STO by Ruby Riott leads to a near fall. Banks gets the hot tag. The Squad finally turns it around. Bayley makes the save on a pin fall. That leads to everyone getting taken out at ring side. Riott small packages Banks for the win. As they celebrate, Bayley blitzes Banks. Bayley really takes it to her. Thank you for giving us a women’s feud that doesn’t involve the belt. It will help the division to have more than one story at a time.

Angle wants to see Bayley. Kevin Owens greets him instead. This match may lead to a championship chance so he should roll with it.

No Way Jose and Mojo Rawley both get entrances. I wish I were kidding. Rawley even gets to say that Jose hasn’t earned the right to walk to a WWE ring. Todd gets interviewed by Rawley. He just mocks him.

Corbin & Balor team against Strowman & Owens. The teams have their comedic differences to start the match. Balor is working over KO. Another comedic spot happens when KO starts to bowl over Balor. He goes for Corbin but gets clothes lined. Balor starts to take over in the ring. Corbin tags in. Balor kicks Corbin in the face. They fight up the ramp for the count out loss. Owens tries to have a winning moment with Strowman. Owens ends up running out of the ring. Owens yells “We did great, what is your problem?” Hilarious. Kevin Owens ends up leaving the arena. Owens goes to valet but Strowman already has his keys. Strowman flipped his car.

Seth “Freaking” Rollins takes on Dolph Ziggler in the main event. Of course, Drew McIntyre is on the outside. I do think it’s interesting that the announcers are going with “Rollins got tired out” angle for his loss. It’s seldom used when an open challenge happens. If it is used, it’s more along the lines of gaining peril and not actual execution. McIntyre isn’t interfering but occupying enough of Rollins focus to let Ziggler get the upper hand. Ziggler locks in a Sleeper. Rollins slips it but Ziggler applies it again. They collide on cross bodies. Sling Blade by Rollins. Ziggler gets tossed outside. McIntyre clocks Rollins going for a Suicide Dive. McIntyre gets tossed from ring side but doesn’t leave. Rollins dives on to both of them. Rollins gets crotched but it only goes for a two count. Ripcord Knee only gets two. Ziggler counters into a DDT on the apron. Rollins barely beats the count back in. Buckle Bomb followed by a side kick. Ziggler kicks out at two. Rollins fights Ziggler off the top rope. Frog Splash only gets a two count. They trade pin attempts with Ziggler grabbing the tights again. Rollins kicks out. Rollins runs into the post. Zig Zag only gets a two count. They jockey for position up top again. Superplex by Rollins followed by a Falcon Arrow. McIntyre pulls the ref out of the ring. He then attacks Rollins for the DQ. Roman Reigns makes the save. He Spears Ziggler on his way to the ring. Reigns then fights off McIntyre. I’m good with the later two feuding too. – Kevin DiFrango