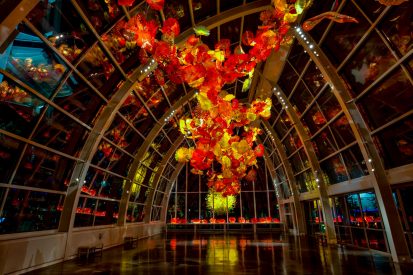 Chihuly Garden and Glass in Seattle WA. Saved from chihuly.com

The WWE starts us off with Dean Ambrose. Interesting. He repeats some of last week’s talking points with Charley Caruso. Ambrose then proposes a bunch of crazy ideas. They circle back to the repeated topics of last week. Ambrose ends with an emphatic union with The Shield. Baron Corbin comes out and spoils the party. He offers either a match with Roman Reigns or one with Braun Strowman. Ambrose proposes a match with Corbin himself. Corbin laughs it off and makes the match with Strowman.

The match starts after the break. Because it is going a while, we get mostly a Ambrose beat down with a small hope spot that was squashed right before the next commercial. Ambrose fights out of a power slam by raking the eyes of Strowman. Dean low bridges him. Ambrose slips out of a power slam attempt again into a Dirty Deeds DDT. He only gets two. Strowman rolls outside. Ambrose connects with s suicide dive. He then throws Strowman into the steps. Strowman barely beats the count. Ambrose follows him into the ring. Strowman power slams him when he gets back in but can’t capitalize. Strowman gets his wind back and goes on the offensive. Another power slam. Strowman picks him up. Roman Reigns comes out. He attacks Strowman so he wins by DQ. Seth Rollins comes out and helps knock Strowman out of the ring. Corbin comes out and says that will not happen tonight. He then makes a pair matches : Drew McIntyre vs Seth Rollins and…

Roman Reigns vs Dolph Ziggler which is next. Rollins comes in and talks to Ambrose. Rollins tells Ambrose that it’s about the war not the battle. Ambrose is still pissed about Reigns arrival. He threatens to go after the Intercontinental Title and storms out. Reigns is willing to put up the Universal Championship but Corbin puts the kibosh on that. Ziggler has got to be pissed. He doesn’t seem fazed and attacks at the ring of the bell while Reigns is still looking at Corbin. He stays on the offensive for quite a while. Reigns finally makes his come back. Another eye rake, this time by Ziggler. A Zig Zag only gets a two count. Ziggler sets up for the Super Kick. Reigns catches him with a Superman Punch instead. Ziggler rolls thru on a Spear and gets a two count. Short Side Spear for the win. That looks weird but is a cool view.

Ronda Rousey comes comes out with Brie & Nikki Bella. Ruby Riott comes out with Liv Morgan & Sarah Logan. They get an inset promo. They really like this trio. They gets plenty of camera time. Riott is ready to hand Rousey her first loss in the WWE. Riott takes an early powder. Michael Cole mentions that Morgan will be wrestling at Super Show Down so that’s pretty big news. Riott rolls out again. Rousey follows. Riott gets the drop on her coming back into the ring. Riott slams Rousey’s shoulder into the post. Riott keeps the beat down going pulling out a variety of illegal moves that aren’t allowed in MMA. Riott takes down Ronda but only gets a two count. Riott toys with her by pawing her foot at her. Riott gets caught going to the Riott Kick. Reverse T Bone type Suplex onto Riott’s face. Rousey “Hulks Up” and rips off her shirt. Spinning Samoan Drop. Arm Bar for the tap out win.

Chad Gable is getting to pull off a redemption story against Konnor. For some reason, I’ve always thought they didn’t both use Ks in their names. I thought Vitkor was that K. Glad they got an entrance on TV for the first time in years. Oh, it’s Bobby Roode in the match. Konnor wins with power early. Roode then starts working over Konnor’s knee. Roode connects with a Block Buster on a wobbly knee. Viktor takes out Gable which distracts Roode. Dominator by Konnor for his second straight win.

A Moment of Bliss. Alexa talks about heros. Her hero was Trish Stratus. She then tells the harrowing tale of Trish burping into Bliss’s when she asked for an autograph. When it comes to meeting your heros, Stratusfaction is not guaranteed.

The B Team hits the stage. Curtis Axel & Bo Dallas are taking on The Revival. Scott Dawson & Dash Wilder work over Axel early. Dallas gets a hot tag that goes south quick. Wilder gets Rocket Launched but Dallas gets his knees up. Dallas small packages Wilder for the win. AoP comes out and lays waste to The B Team. Akam & Rezar finish them with the Super Collider.

Roman Reigns checks in on Ambrose. He wants Ambrose ready for Super Show Down. Ambrose wonders if he should be Universal Champion and wonders off.

Dolph Ziggler points out that The Shield is on the brink. Strowman gives Ziggler notice that he’s their weak link. Drew McIntyre seems to approve and they both walk off.

Seth Rollins & Drew McIntyre have their match. McIntyre side slams Rollins on the ring apron leading to a break. Rollins comes back with a Sling Blade. Another Block Buster for the evening. Rollins gets two from a spring board clothes line to the neck. McIntyre back elbows Rollins. McIntyre fires off a few chops. Rollins grabs McIntyre’s arm and turns it into a Falcon Arrow. Cool move. Rollins ends up Buckle Bombing McIntyre. Rollins sets up for The Stomp. Ziggler runs out and rolls through the ring. McIntyre with a Claymore Kick for the win. They start the beat down. Rollins comes out for the save. Strowman tips things in the heels favor. Dean Ambrose arrives with an axe handle. He takes out Ziggler & McIntyre but Strowman flattens him. The heels win the battle for the evening.

Kevin Owens & Elias get along at harassing the intern backstage. They are also ready to perform in the ring. Elias slanders Seattle for it’s worth in having an NBA team. The crowd goes ballistic. They are almost screaming their promo. This is so awesome. Lio Rush finally comes out and ruins the booing. He compliments John Cena as one of, if not thee, greatest of all time. He then introduces Bobby Lashley for his match with Owens. Corey Graves says that Lio Rush sounds like Meatwad from Aqua Teen Hunger Force and he couldn’t be more right. I will never listen to Rush the same way. Owens ens up working over the left arm and hand of Lashley. Of course Lashley finally makes a come back. At that moment, Elias goes after Rush. It distracts Lashley. Owens rolls him up for the win.

Bayley vs Alicia Fox is a match on Raw because Finn Balor (Bayley) and Jinder Mahal (Fox) are fighting on Mixed Match Challenge. Bayley To Belly For the win because that match doesn’t need reviewed.

Shawn Michaels comes out for one final hype session. He is quickly assaulted by Kane. Undertaker comes out to join the beat down. HHH comes down for the save. He gets some one on one time against Taker before Kane starts attacking him. Double choke slam by the Brothers of Destruction. Tombstone on HHH to really cap it off. – Kevin DiFrango