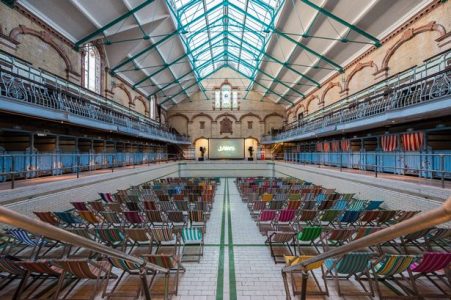 The WWE starts off this taped edition of Raw with the whole roster being on the stage. Baron Corbin then comes out and gives us a video package about Braun Strowman vs Brock Lesnar. Corbin gets to play cheer leader for the annual fun known as Survivor Series. Corbin picked himself as Captain of the Raw brand. He is not eligible for the team though. Dolph Ziggler & Drew McIntyre are the first picks. Braun Strowman is the third choice. Corbin chooses Alexa Bliss as the Captain of the Women’s Team. Bliss is also abstaining from wrestling. Her Rah-Rah speech isn’t much better. The Riott Squad gets an Evolution rematch vs Natalya, Bayley & Sasha Banks. Kurt Angle comes out before the match can be started. He wants to be on the SS team. Corbin shoots down the idea. Angle suggests they wrestle for the right to lead the SS Team. Corbin agrees because he’s an arrogant fool. Strowman comes out and chases Corbin. The roster ends up getting into a massive brawl. Strowman hunts down Corbin back stage.

Natalya is wearing The Anvil’s sunglasses tonight. Bayley & Sasha Banks are her team mates against Ruby Riott, Liv Morgan & Sarah Logan again. Nattie took a beating while I talked to the Wife about her. Sasha Banks gets the hot tag. She cleans house. Bayley gets to continue the positive momentum. Bayley dives to the outside on Morgan & Logan. STO by Riott changes the momentum. Logan pulling Bayley arm first into the middle rope looked vicious. Bayley is taking a beating after another commercial. Natalya gets the hot tag. Natalya puts the Sharp Shooter on Logan. Riott does the first truly destructive thing of her Riott Era and breaks the Anvil’s sunglasses. The match gets no finish. Natalya weeps while the Riott Squad relishes the anguish.

Jeremy wanted me to watch DX vs The Brothers of Destruction for a goof. I did not oblige his request.

Apollo Crews is getting a shot at Jinder Mahal which is a sink or swim match for him. Press Slam into a Standing Moonsault for the quick win for Crews. Good for him. I’d love to see more of him in the ring.

Seth Rollins calls out Dean Ambrose again since he can’t call out Brock Lesnar. Rollins doesn’t think he can defend the Tag Team Titles on his own. Corbin pops onto the Titantron and says that Rollins can do just that. He has a match against the Authors of Pain. Drake Maverick is still with them. Rollins gets a second wind in the match after an extended beat down. He rolls through a lot of his regular offense. He almost retains after a Frog Splash onto Rezar. Akam gets tagged in. They double team Rollins with a neck breaker/ sit down power bomb combo for the win. Dean Ambrose makes his way down to ring side after the match. He acts like he’s going to say why but then backs off the mic. Kick to the gut then Dirty Deeds to leave Rollins laying. Michael Cole asks Renee Young directly about Ambrose’s mind set. She says he can’t be reasoned with at this time. It’s better than nothing but it’s still a weird response.

Dolph Ziggler comes out. He’s got a new conspiracy to pedal. Thankfully, Elias interrupts. He has a new song and it makes fun of Ziggler naturally. Ziggler finally gets mad and invites Elias to meet him in the ring.

The Revival are trying to make tag team wrestling a thing again. They are going to send the Lucha House Party back home.

That was an interlude before Ziggler & Elias had their match. I mean, good for people to get TV time but the timing was weird. Before the promos or after the match would have been fine. The match gets a commercial break so why did you extend it’s start with the Revival promo? Ziggler wears down Elias with a reverse chin lock. Elias finally makes a come back. He misses on a flying knee so they have to improvise. He connects moments later with one so that’s why I’m assuming botch. Elias fights off a Zig Zag but Dolph connects moments later in what looks like a planned spot. Nice of this match to have both examples. Elias hangs up Ziggler on the middle rope. Drift Away for the Elias win.

Ronda Rousey comes out to respond to Becky Lynch. She rattles off all of her accomplishments while Becky was doing all of her myriad of jobs. She tells Lynch that she wants a challenge so bring all the resentment she wants to. Rousey closes by saying she’s the Baddest Bitch on the Planet. Nia Jax comes out and wishes Rousey luck and reminds her that Jax will be waiting with her.

Ember Moon is having another match with Jax. Moon goes for a cross body and gets tossed down. Jax splashes her in the corner. Jax locks in a Cobra Clutch. Moon fights out but then goes for a roll up. Moon starts a kicking clinic on Jax to get her off balance. Spring Board cross body gets a two count. Jax misses a charge into the corner. Moon tries to take advantage but can’t. Samoan Drop for win. Tamina comes out and stares down Jax again. She gives Moon a Samoan Drop too. Tamina puts Moon in a Boston Crab. Jax drops elbows on her to turn heel. Good.

Finn Balor gets interviewed by Kayla Braxton. He is not happy about what happened to him last week at the hands of Bobby Lashley & Lio Rush. He’s ready to get revenge tonight.

Baron Corbin wants away from the arena. He appoints Drew McIntyre in his spot. I’m not so sure of the outcome any more. Strowman chases the car as Corbin gets out of Manchester.

Lio Rush gets to hype up Bobby Lashley. Rush is still incredibly annoying but no message other than that is sent. Rush trips Balor when he was starting to get some momentum. Lashley took it from there though. Dominator for the win in what is probably the shortest match I’ve seen Balor in. Drew McIntyre comes out and stares down Lashley. He then looks like he’s going to help Balor when he fires him off and gives hima  Clay More Kick.

Angle and McIntyre have their match as the main event. McIntyre starts toying with Angle after a Clay More Kick. McIntyre talks trash to him. Angle transitions into a Ankle Lock. McIntyre gets out by kicking him off. McIntyre locks in an Ankle Lock. Angle taps out. Drew looking good again. Top players needed on Raw now. Good tiem to emerge. – Kevin DiFrango