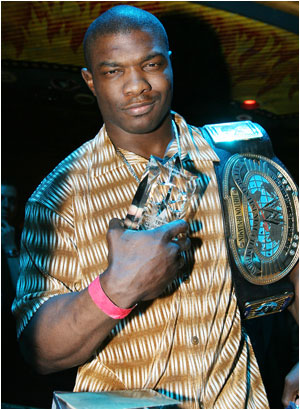 This would have been better.

WWE.com has a photo spread of Candice Michelle and Shelton Benjamin at the Democratic National Convention. Now the pics are nothing special but they require a look for two things.

One, Candice looks a lot different then the last time she was on Raw breaking her collarbone. Not sure if it is an improvement but she sure looks different.

The second reason is to see what a total tool Shelton Benjamin looks like walking around a pep rally, yes that is all it is, with a gold belt on while wearing a suit. Sure there are a bunch of other retards in the crowd but they are what they are. They are freaks of nature that have the power to vote. They aren’t to be taken seriously. If so they wouldn’t have dressed like it was 80% off day at Miracle Hill.

Shelton, on the other hand, is an adult male in a nice suite, carrying around his United States title, representing a multi-million dollar company. Whoever told him he needed the belt should be fired immediately. It encompasses all the bad stigmas of pro wrestling. So congrats WWE. -Jeremy