I couple of weeks ago I started breaking down the styles of ring gear of the ECW roster.  I’m here to continue the prognosis of the other Superstars that I skipped.

The Miz – On his way to the ring he was wearing a black fedora with a white band that had black leopard spots and his very own “Chick Magnet” t-shirt.  In the ring, the Miz sported a pair of long shorts that were black with a red velour pattern and light yellow trim.  In the middle of the pattern was a black and white yin and yang.  On the bottom of the shorts, near his knee is a black patch with white eyes.  The miz also wears black elbow pads and three Under Armour wrist bands on his forearms that are grey, black and red.   Certainly one of the most complex designs that I’d like to get a closer look at but his pictures on WWE.com aren’t quite up to date with what I saw.  I’d also like to know the meaning of the eyes.  The look fits his personality to a ‘T’.

A much better fedora without a leopard pattern band. - Photo brought to you from withaswing.com

John Morrison – John was wearing a black robe with gold trim and studs that has fur on the shoulders and back with a hybrid cross and starburst design.  He sports two silver neck chains and dark brown sunglasses on his way to the ring too.  In the ring, his pants were a olive green velour and had the same hybrid cross and starburst design  which was trimmed in red with silver highlights.  The pants also had a black belt with silver studs.  John’s boots were brown and fur covered at the top with the same hybrid cross and starburst design that was gold and silver.  This outfit is the pinnacle of complex in ECW and also fits his persona with how gaudy it is.  The browns and olive green colors are muted so it helps to pop the trim that is silver and gold.  This page from WWE.com has a nice shot of the pants and design on the boots but is a different color than he was wearing the night I wrote this piece.

Finlay – His singlet has a black stripe down the center that has a green shamrock in the middle of his upper body.  That stripe is flanked by green with a celtic knot on both hips.  Finlay wears white boots with a green lace pattern on the sides.  This design is yet again very predictable considering how much they emphasize Finlay’s raising and heritage in Northern Ireland.  Both and him Hornswoggle outfits are fine though. 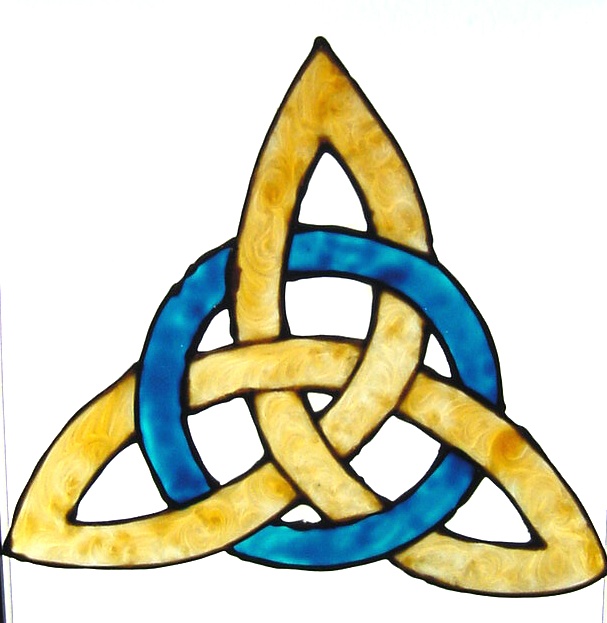 This is the knot that Finlay has on the side of his trunks but it is black with white trim. Photo courtesy of www.sisterscandlesandcrafts.com/celtic.htm

Mark Henry – He was wearing a black singlet with a white “WSM” on each leg along with a design that looks to be someone dead lifting weights.  Mark wears black knee pads and boots.  The simple designs are in for the killer heels and this one is no different.

Matt Hardy – He wears his t-shirt to the ring.  Matt has pants that are red with black and white highlights.  They appear to be regular pants because they have pockets that are solid red and have the Matt Hardy “MH” logo in black and white on them.  The pants also have a black stripe down the middle of the leg and white trim around the zipper.  They are held up by a white belt with a design which go through white belt loops.  To finish things up, he has black elbow pads with white tape tape from his hands up to his forearms.  Matt has another fairly complicated design that is probably designed by his brother.  It stays simple with the colors though which makes it look slick.

If you have a problem with my taste or want to bring up aspects of the designs, get a hold of me at kevin@stuntgranny.com. – Kevin