You are here: Home › WWE News › Ted Dibiase Is Going To The Pictures 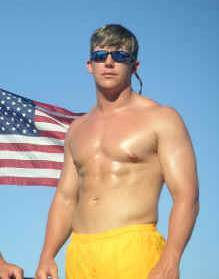 So for all of you who have been wondering what happened to Ted Dibiase, well look no further than PWInsider.com. Teddy boy has been off getting married but more importantly he is starting to film “The Marine 2.” Since the first “The Marine” was such a hit and was made with such care and quality, WWE has indeed sanctioned a straight to DVD sequel. Apparently John Cena tossed his weight around and wants nothing to do with this possible cash cow.  He must have gotten wind that Kelly Carlson will not be in this one so why bother being part of the sequel.

Ted Dibiase is a strange choice to star in this since he is hardly a household name. WWE could have used any number of wrestlers for this project and not stunted the momentum Ted was showing on Raw. Wrestlers such as……….forget it. No word yet on Robert Patrick’s involvement but more importantly no word is out about the black guy who got fingerbanged at camp. If you saw the movie, you know exactly who I am talking about. -Jeremy

One Response to “Ted Dibiase Is Going To The Pictures”