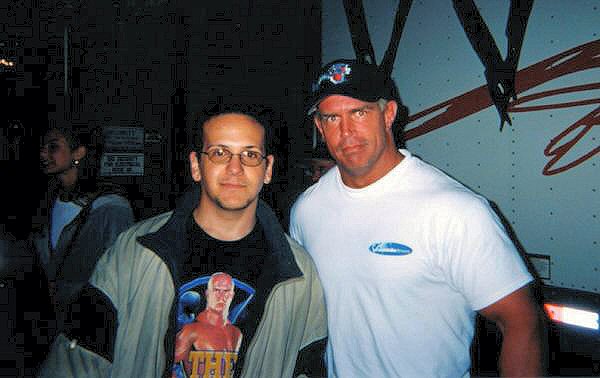 "Duhhhh, so yer the one who baought mah shirt?"

Apparently Bob Holly, who was only ever given the Intercontinental Title out of charity, and whom God correctly struck twice with his Kurt Angle-aided broken arm and Brock Lesnar-approved broken neck, has opened a wrestling school. Yep, here’s the website: http://bobholly3.tripod.com/. The “3” in the URL makes me think that this mongoloid tried numerous times to get a website up and running. He probably kicked the shit out of his computer redneck style out of frustration. “Gawd dammit, why don’t this gard darn thang cumm up on my clickety-clickety bahx??” When someone says “computer,” he probably only hears “Puder” and goes ape-shit, kickin’ over his mud fence and spillin’ his spittoon everywhere. And Kip James/Billy Gunn is the other trainer. Man, think of the heights their students will reach! Maybe Sam Houston will swing by and guest teach. Maybe Zeus will have a class on the Art of the Promo. Nah, something tells me Bob Holly wouldn’t take kindly to Zeus’ type ’round those parts. -Eric