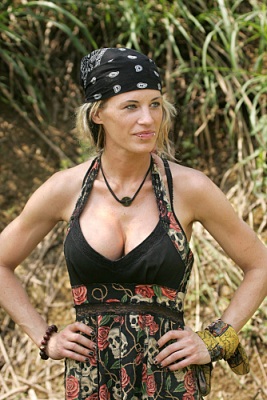 I know you missed me like my team on Survivor.

In the Tweet heard ’round the ‘net or just in Ashley Massaro’s tiny brain and audience, including to our source Prowrestling.net, we were supposed to know that she was going to return to the WWE by Summerslam.  From her Myspace page –

“Now, as much as I’d love to say that it is true, it’s not. Because it ain’t me, folks. Like i’ve said I have no other [accounts] like that! I’m currently working on something that you will be able to view very shortly but I’m under contract and can not return to WWE just yet. So, hopefully it won’t be long. Last time I spoke with Johnny Ace [WWE vice president John Laurinaitis] he said to come down to a taping so I’m gonna do that asap.”

Her grammar skills wouldn’t get her a passing grade in her imaginary child’s first grade class. Hot damn. Anyway, thankfully we’re spared of having to see this twig with ginormous fake knockers for at least the foreseeable future. She’s tied up in something that she can’t talk about because Ashley is probably still trying to cut ties with her clients from the escort service. – Kevin