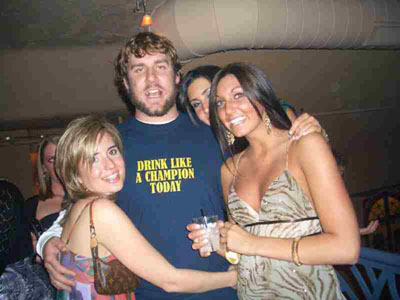 According to every single place ever on the internet, including sites that haven’t been updated since 1996, Big Ben Roethlisberger will be the guest host next week for Monday Night Raw, as it comes at you live from the Wachovia Center in beatiful, scenic, rustic, historic Wilkes-Barre, Pennsylvania. That’s right, my double main, the starting QB on my fantasy football team, coming at you in stunning high definition on Monday Night’s premier wrestling extravaganza!

There’s only one small problem. The quarterback is apparently going to be taking his offensive linemen with him, and according to left tackle Max Starks, no one bothered to tell to any of the coaching staff that they would be there. Now, the Steelers play on Sunday, have a team meeting on Monday, and have off on Tuesday, so it’s not really that big of a deal, but you know all the talking heads and football announcers are going to have a field day with it, so I hope Ben is prepared for that.

And, real quick, what is it with people whenever something wrestling related comes up in the news? Like, you just know if Big Ben takes a hit on Sunday, some announcer dumbass is going to say that the guy PILEDROVE HIM down to the grass or whatever. And then the other guy will laugh for like an hour and a half at it, and then they’ll joke about how wrestling is probably fake har har, and then I’ll stab myself and die in a puddle of my own vomit. – Dusty

Remember to register for our message board at http://www.stuntgranny.net/cgi-bin/yabb24/YaBB.pl. It’s totally free and totally cool. Right now we are doing a best PPV tournament, along with having many other intelligent conversations therein, so register today!