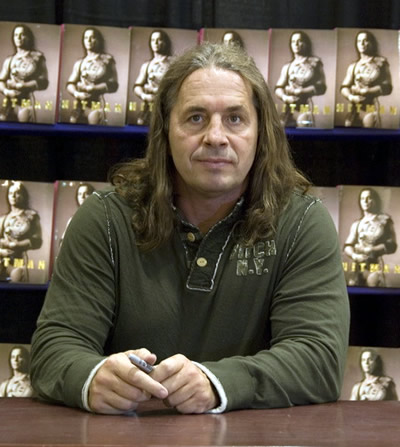 Best General Manager there ever will be?

According to my double main man Jason Powell at prowrestling.net:

Bret Hart is open to the idea of appearing on camera for WWE again, according to the Wrestling Observer Newsletter. He has had talks with the company about returning as a weekly storyline character, and his interest is one of the reasons they went with the screwjob finish at the Breaking Point pay-per-view.

Obviously, I don’t think Bret will or should come back as a full time wrestler. I wouldn’t rule out the possibility of him wrestling once or twice (see Rick Steamboat’s “comeback” as evidence that it can be good if it’s done right), but the much more likely scenario would be for him to be the new General Manager of one of the brands.

Now, seeing as though as he is probably not going to want to be on the same brand as Triple H and Shawn Michaels (and I can’t really blame him for that, and Triple H is a real problem and he needs to go away but no one with any power can tell him that), it would seem as though Smackdown would be the best fit for him. Luckily, with the whole Teddy Long abduction storyline, it would appear that Smackdown might be in need of a new General Manager anyway. Everything’s coming up Milhouse Hitman! – Dusty