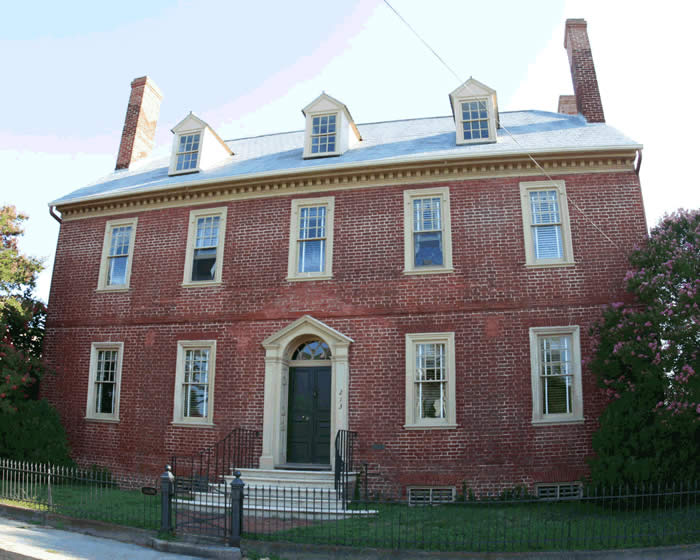 I explained the reason behind doing this set of articles in Part I. The style I am looking at in Part II is American Colonial. The origin comes from the English Baroque style which was headlined by Sir Christopher Wren (St. Paul’s Cathedral in London is fantastic)  but it morphed into the Georgian Colonial during the reign of the House of Hanover for the English monarchy. Their reign lasted from 1714-1830 so it was a time of the settlers coming over to the “New World” that helped to make this style popular in England and here. Atlanta was established around 1822 so it was the original style of the city. According to the Atlanta Architectural Style Guide, American Colonial houses are now found in the Brookhaven area of Atlanta.

The biggest physical features are the square shaped plan and symmetry of the building. Even the chimney was built twice to make it symmetrical. That feature may have had more to do with heating back in the day though. Even the roof is symmetrical whether it’s a gable roof (Shown above), gambrel (Think barn shaped roof) or hipped (Fill in a gable roof and give it an extra angle). The roof will sometimes have dormers (Shown above) which are the protrusions with windows in them and a gabled roof above them.

The details are pretty basic too. The door has the most ornament with a transom (the white/beige bar) and transom light (window over it). Granted, I learned that combination as a transom. Flanking the door are pilasters, which are flattened columns that give the wall some relief. The pilasters are supporting the entablature which is in this instance looks like a flattened gable roof. The windows are not only symmetrical in location but also in design with muntin bars in the top cell (dividing it into 9 lites) with the bottom cell being just glazing. Just underneath the roof  is a cornice that has dentil work, which is created by the solid/void of the wood relief.

Analysis: This building is suited for use by the WWE because of it’s simplistic design and it’s symmetrical look. Unfortunately, there isn’t much for the WWE to cartoon up. They love to use oversized columns but I’m not sure they’re going to be willing to use an entablature or cornice around the set. I don’t think they’ll use this style, but I’ll give a final verdict after going through the other 4 design styles. – Kevin