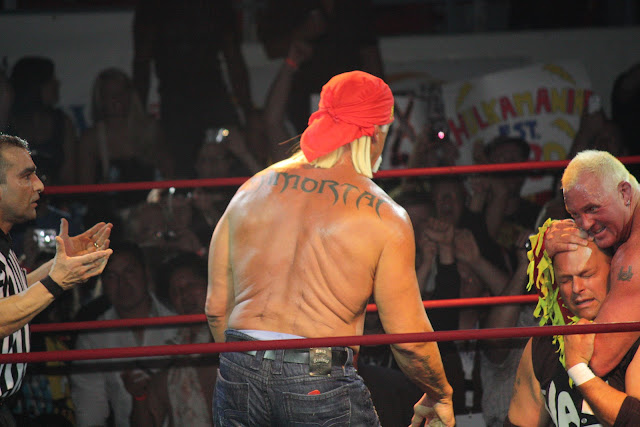 GEEEEYIKES, what the hell is that?? It looks like a little kid with scissors and crayons went nuts on a broken leather couch!

According to the MadMic23 blog (by way of Prowrestling.net; click both links to get the full stories), Hulk Hogan appeared in something called Brantford, Ontario this past Saturday to interfere in a six-man tag featuring his friends Virgil (Wrestling Superstar), the Nasty Boys and Fat Brutus Beefcake. Blah blah blah, Beefcake gets double-teamed by the Nasty Boys, blah blah blah, Hogan makes the save, tears off his shirt, and… OH MY GOD! Jesus Christ, cover that shit up! Almost 300 fans in Brantford were treated to a view of Hogan’s new tattoo, which faintly reads “IMMORTAL” in some awful garage-metal-band font across his shoulders, and two surgery scars flanked by a bunch of loose skin on his back. Don’t you just want to grab a handful?

In other news, this show also featured such legends as X-Pac, Tatanka, Scott Steiner and Kevin Nash (total bump count: 9, all from Sean Waltman). If you needed any more proof that Canada is about 16 years behind even Des Moines, Iowa, this show is it. -Eric

5 Responses to “Hulk Hogan shows off back tattoo, scars in no-name Canada town”