You are here: Home › WWE News › CM Punk is making the rounds 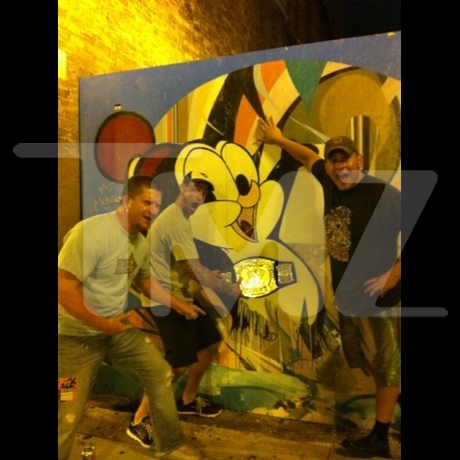 Yeah its has TMZ plastered on it but who cares.

So less than twenty-four hours after winning the WWE Title and then subsequently, from a storyline aspect, walking away from WWE, CM Punk is getting a lot of press coverage. He was spotted by TMZ reporters “celebrating” with the WWE Title on the streets of Chicago. He was then photographed on the field at Wrigley Field before the Cubs lose another game. This isn’t too bad considering Punk got next to no coverage of any sort, including WWE.

You have to admire the fact that CM Punk is celebrating with a Diet Pepsi in hand while some young hotties ogle the gold. Considering his rumored reputation with the ladies can we all hope he banged out early Monday morning? Ace Steel, who got absolutely no mention on line by and of the fans also makes an appearance with his boys. Also of note is Colt Cabana holding the WWE title high above his head. Imagine if he was still in WWE; he could have been afforded that opportunity for real.  Ok, probably not but one can always dream. -Jeremy