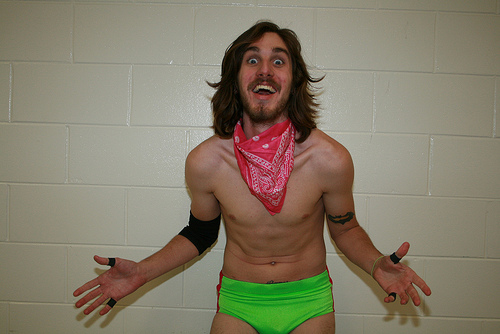 Jeremy: Ok so you watched PWO from two weeks ago not this current show?

Jeremy: So what you think of the main event and all the shennanigans?

Kevin: What a clusterfuck.

Kevin: Very little build except by Maguire for the commissioner spot. Then reveal it and have anarchy? What a terrible choice.

Jeremy: I was totally shocked when Fontaine won and I thought, what a great idea. No one expected it. What a genuine surprise. Then they totally killed it all. Why was there a need for a commissioner in the first place? Who the hell makes the matches anyway? Was anyone, I mean anyone clamoring for an authority figure? Let alone some internet writer?

Kevin: “The Board” or some such entity.

Jeremy: Oh you mean like TNA’s “Network.” Ugh. If you are going to reuse ideas don’t reuse TNA’s. If an authority figure is going to be used shouldn’t it be “someone” not just anyone.

Kevin: Are you saying LaBar isn’t a someone?

Kevin: Thanks for adding to my final analysis

Jeremy: If I am a new fan of PWO watching that mess I really have to be scratching my head.  Maybe it is just me but they routinely have a simple, solid show and presentation. There is no need to get cute. Keep it streamlined and avoid this type of garbage. If that match had ended and then Labar came out and did a “tisk tisk” face with no announcement that would have been ideal. This way you would have had three different elements there. Why is that guy on? What happens with Matt Cross? Fontaine is the new champ. All three are hooks for the next week. Instead they wasted it all

Kevin: Good call on that couldn’t have summed it up better.

Jeremy: I will give them a pass on some of it since I do not know their schedule for tapings and what not.  But for episodic TV they blew it. I would think they tape all at the same time. All of the participants are still in the building so there would be no scheduling conflict.  Instead the following week we are treated to RBI whoever vs Daniel Arkham for this week. And holy shit was that painful.

Jeremy: Anyway, is there a wrestler you have seen that you wish did some sort of performance enhancing drugs so that WWE would notice them and skyrocket them? As bad as that theory may be. That’s how I feel with Fontaine.

Kevin: I had forgotten they were getting a new commish.

Jeremy: So did I.

Kevin: That was their first episode after the break.

Jeremy: There were some aspects I liked. Even though he has terrible hands Dombrowski sold both victories very well. Maguire was great in his cheerleading during the victory as well.

Kevin: He had me cracking up most of the episode. Maguire truly throws out stuff that is close to the topic but enough that Dombrowski has to question his line of thinking.

Jeremy: It took me a while to figure out Maguire’s style. At first I thought this dude was lazy but then realize he is pretty decent smartass but it comes off so low key it nearly gets lost.

Kevin: It helped when they stopped moving him in & out of the booth.

Jeremy: There seems to be a lot of potential with PWO. As an indy league goes the wrestlers are not embarrassing.

Jeremy: I think the production could be better though to capitalize on them.

Kevin: For all the gadgets they got for production, they need money for a set. They like to tape in different venues, but I’m talking backgrounds for the taped promos that they could ship from place to place. Speaking of production, it wasn’t just me that heard the announcers sounding like they were broadcast in the whole venue, was I?

Jeremy: No you were not. I swear at some points you heard them through the PA system. That is a huge no no.

Kevin: Those types of mistakes should start being eliminated. They’ve been around long enough and had the toys for long enough.

Jeremy: That just seemed like a gaffe though not a constant problem.

Kevin: It happened too many times for my liking.

Jeremy: I don’t want to come off negative about this promotion or product though. It needs to be said there are positives but this just stood out as a major mess up in booking. They lost out on a lot of future potential. Then I saw the ads for the Brawl in the Hall promotion and wondered why this wasn’t all build up to that.

Kevin: Is that the Dec. 17th taping? I was buzzing thru the commercials.

Jeremy: I think so. They tout it as the first annual event so it should be special and this is where the build should have started. Not started and ended in the same ten minute segment.