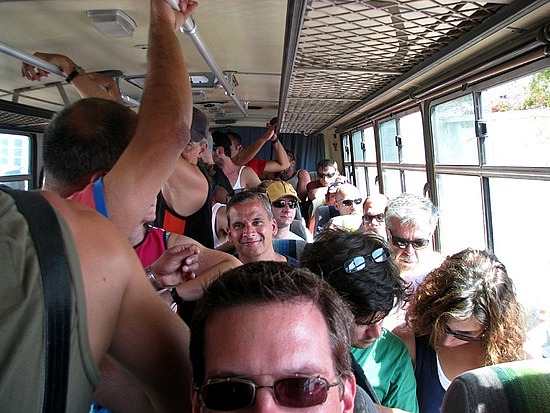 So my schedule is busy already but when you toss in going to see the Bluejackets (Hey they actually won!) on your only day off during the week, it feels even more jam packed than normal. Next week will not be any better with my buddy Mittan coming from Altoona PA for the Machine Head show next Tuesday. I’m pumped for it. Speaking of Tuesday events, Smackdown is coming back to Cbus on March 13th so far warning on spoilers on Twitter and the site in general. Let’s roll.

I’m glad they’ve already given me something to FF thru with the review of Bobby Roode & Jeff Hardy. James Storm is going to whoop Roode’s ass at the PPV. Of course we get Hardy. They need the heel to weasel out of the championship. Three way dance I’d imagine since Sting is buddy buddy with the baby faces. They barely start to argue when Roode comes out. That solidifies what is going to happen at the PPV. Ah, a number one contender’s match. I like that better. Three way dances are dumb.

Angelina Love challenges Eric Young. The Knockout’s division is so much better than the Divas. (That’s sarcasm.) Gunner takes on AJ Styles. What did AJ do to deserve this? Ric Flair makes love to Gunner’s ear. A decent match is of course going to get ruined when Daniels & Kazarian arrive. I’d think that a couple of legit wins would help Gunner more as a killer. Magnus is ready for Crimson when he wonders into the shot. Their promo style is terrible. I don’t feel special or like it’s an inside look.

Bully Ray says he deserves a title shot because he’s been undefeated. Sting defends his ground. If he keeps doing the “Me boss, you employee” Crimson takes on Magnus. Taz is worried about Crimson being a single’s wrestler. Hilarious line of logic in a bad way. Crimson beats him in no time flat. They’re challenging for the titles, at least let him look good. For crying out loud. Samoa Joe attacks Crimson. Why would Morgan not be waiting by for this to happen? He finally makes the save. You still could have done this beat down but Magnus needed to look better. Eric Young is wondering if he can be in Bellator. Even the caterer actor is terrible. EY doesn’t wrestle women. ODB tells him to man up. ODB solicits EY but he’s too dumb to know it.

We get a Garrett Bischoff Rocky training video. He goes Bruce Lee with opponents surrounding him. Garrett teases his trainer again. We get review of Gail Kim, Mickie James, Velvet Sky and Madison Rayne review. Rayne is ranting when we go live. Gail gets her to calm down. Why did she lose the confidence? She was Queen of the Knockouts even before she was Karen Jarrett’s pal.

We get a commercial break women’s match. I dig their cage. WWE’s looks too weak to do much damage.  The stanchions look more substantial. I have to take back my sarcastic remarks about the Knockout’s division. At least for this match between Mickie & Madison. I’m digging it. Mickie early, Madison middle, Mickie makes a strong comeback and win. That was the exact kind of match that Magnus needed before the attack. Austin Aries is entertaining me by talking in a circle.

Mickie is congratulated backstage by Tara & Velvet. I liked this “unscripted” stuff better. I’m annoyed by the camera guy questioning. Not sure why it’d be better to have someone in front of it like that douche Matt Striker. Jeff Hardy needs a pay off right now because of what he went thru. He is lacking a lot of self blame. Austin Aries gets a recap of after Genesis pay off. He says the look is just to off put people. He gives credit to his brain. Entertaining stuff. If they built up the guys around him, it’d help a whole lot. Aries says he needed competition when Alex Shelley comes out. Nice. He is right that the tag team division needs the Motor City Machine Guns. Aries is getting in some solid comebacks. A Double tells him to earn his title match. ODB wants EY to whoop on Angelina Love. Winter attacks her. Winter wins when she takes a pipe to her. She finises her off with a whip then. If that’s going to be your gimmick, skip the steel pipe.

Angelina is accompanied by Winter. EY comes alone. I figure he gets beat until ODB comes down. EY can’t attack her. He screws around until she kicks him in the yam bag (TM Taz). ODB hits the ring. EY tosses them out of the ring after recovering. They kiss again. I’m not sure if he’s better than Santino. Their promo stuff together is fun but his in ring stuff is terrible. James Storm is ready to be the World Champion.

Jeff Hardy & James Storm don’t get much time before the commercial break. Hey, no Abyss! Thanks for reminding us Tenay. Don’t figure out his where abouts, your program is better without him. Bully Ray interferes to ruin a very good match. Sting should be at least making a verbal save. Hey, if you’re not to fire a guy, I suppose I’m fine with the figure head attacking him with a bat. At least Bobby Roode‘s only the most dominant man in Impact Wrestling. Claiming more than that would go from good heel work to worthless statement by saying in wrestling. -Kevin